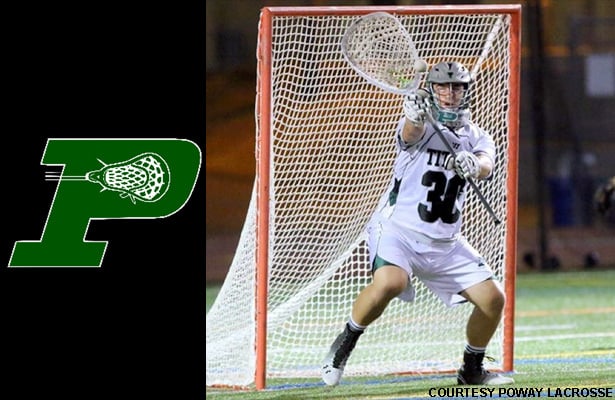 Senior goalie Jake Butler of Poway High School has committed to play at NCAA Division III Arcadia University in Philadelphia. Standing 6-foot-2 and 250 pounds, Butler takes up a lot of space in goal and really makes it tough for shooters to find the back of the net.

“I really liked Philadelphia when I visited Arcadia University,” Butler said. “Living in Philadelphia will be a huge change for me, because I have lived in San Diego my entire life. I am excited for the change of pace. Also, Coach [Nick] Taylor impressed me very much. His practices were very organized, and his message was very clear to his players.”

Butler also considered Sonoma State and Concordia University (Irvine) but ultimately decided to commit to Arcadia to have a chance to compete at the NCAA level. Starting as a freshman, Butler helped lead Poway to the playoffs in 2013. During his sophomore year, Butler received a serious concussion while playing football and saw limited action in the spring of 2014 and had to take a step back from the game.

When asked how his concussion affected his quest to play NCAA lacrosse, Butler said, “I was determined to play lacrosse in college, and I was not going to let anything get in my way. I was sad that I could not play football anymore; I really enjoyed playing, but one more bad concussion and I may have not been able to play lacrosse. I decided from that point on, I was going to work hard in the weight room and play as much lacrosse as possible so I can play in college.”

Fast-forward to 2015, Butler found himself back in the cage for the Titans and helped lead his team to the San Diego CIF Championship. The success in the spring catapulted Butler’s exposure and helped put him in a great situation this past summer to get recruited.

As a member of the 3d Lacrosse San Diego 2016 Team, Jake traveled across the country from tournament to tournament to showcase his talents in front of college coaches. Between the tournaments and the Nike Blue Chip camp, Butler caught the attention of many recruiters and finally had a chance at achieving his goal.

“I am looking forward to a great senior year and can’t wait to represent the West Coast when I go to school in the fall of 2016,” Butler said.

Butler is the ninth Poway Titan from this spring’s roster to commit to playing NCAA lacrosse in the future.

Check back here for more updates on San Diego players committing to play lacrosse in College!