Potent Offense Clicking for No. 16 Palisades 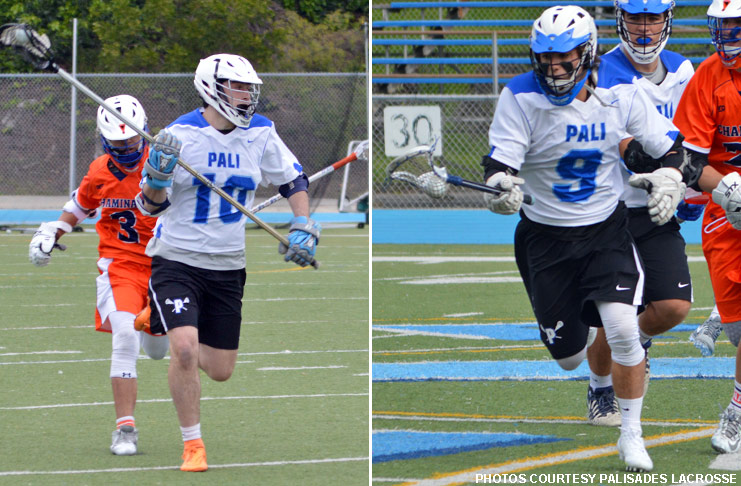 After evening their record at 1-1 last week, earning their first win of the season Thursday vs. No. 20 Culver City, the No. 16 Palisades Dolphins face their third consecutive ranked opponent today at No. 6 Agoura.

Thursday, Pali got off to a quick start against Culver City, with junior captain Macchio Rissone scoring just 22 seconds into the first quarter and went on to win 14-3. Senior Brandon Kay controlled the faceoff X throughout the first half, allowing the Pali offense to work. Sophomore midfielder Jack O’Rourke added to the scoring by sticking one from the outside. Freshman Alessandro Caso then quickly tallied his first goal of the season.

Palisades played a tough defensive game against Culver City and really showed some toughness. Behind senior Spencer Au in cage, the close defense of Kyle Lee, Martin Avila and captain Noah Robinson buckled down and gave up only three goals to a gritty and skilled Culver City team.

Culver City’s Christian Trice was a workhorse and kept Pali’s hands full as his athleticism allowed him to get multiple shots. However, Pali goalie Au stepped up and made some big saves.

That victory offset an opening 13-11 loss to then-No. 12 Chaminade, which has since moved up to No. 10 in the coaches poll.

Rissone has scored 10 goals in the first two games to anchor the Dolphins’ offense. O’Rourke has scored six goals and senior Zane Daily three. Caso and Reicher Bergstein have added to the Pali offense tallying their first goals on varsity vs. Chaminade and Culver City.

Overall it has been a team effort with multiple contributions, which has really been the difference in 2017 for coaches Kevin Donovan and Will Manning.