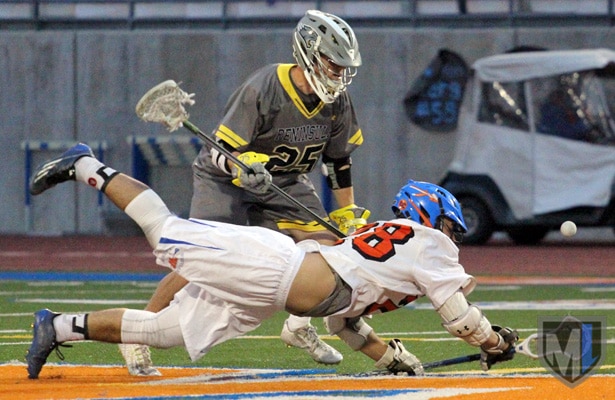 Junior middie Kitt Stoddard won 10 of 12 first-half face-offs Thursday, keeping the ball in No. 4 Westlake’s possession and enabling the Warriors to build a comfortable lead in what became a 16-6 playoff win over No. 12 Peninsula.

Westlake advances to the US Lacrosse LA Division semifinals at Glendale HS on Saturday, where the Warriors will face No. 1 seed Palos Verdes. Westlake is the only LA-area team to beat the Sea Kings this season, posting a 9-8 win in what was PV’s season-opener. PV lost its next game at OC power St. Margaret’s but hasn’t lost since, winning 18 in a row.

Thursday, the Warriors (14-4) turned Stoddard’s face-off work into a 32-8 advantage in shots in the first half, and attacks Duke Cohen (5g, 2a), Spencer Tyoran (5g, 1a) and Brett Reilly (3g, 3a) scored seven goals between them to help Westlake built a 9-2 lead at the break.

Remarkably, the first-half margin could have been much larger if not for the work of Panthers senior goalie Connor Graves, who made 12 saves in the first two quarters and finished with 18 for the game.

But Cohen, Reilly and Jacob Mannisto (assisted by Reilly) rattled off three more goals before the horn, though, all but putting the game out of reach. Mannisto (2g, 2a), Philip Bliss (1g) and freshman Nick Reilly (1a) provided offense from the midfield.

Beachboard led Peninsula (12-6) with three goals and an assist, and Tseng (1g, 2a), sophomore middie Ethan Burrage (1g) and junior middie Will Mbomeda (1g) each scored one. Emilio Nunziati, who scored the game-winning goal to beat Agoura in overtime on Tuesday, had one assist Thursday. Scott Phillips, Peninsula’s do-everything long-pole, had two assists, seven ground balls and took most of the Panthers’ face-offs.