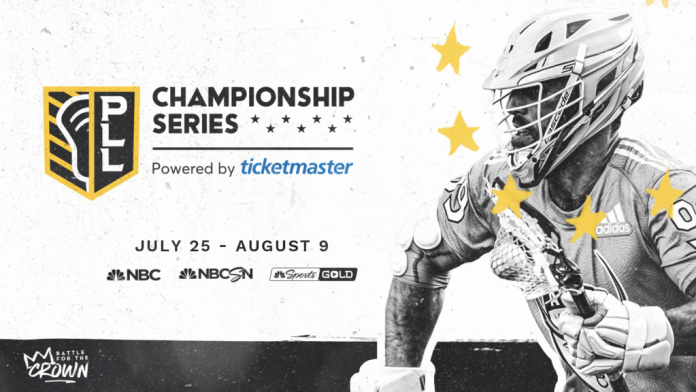 LOS ANGELES, CA. (June 11, 2020) – The Premier Lacrosse League (PLL) announced today that Zions Bank Stadium in Herriman, Utah will host the upcoming PLL Championship Series Powered by Ticketmaster. The three-week quarantined and fanless tournament is scheduled to run from July 25th through August 9th, with players arriving a week in advance, and all 20 games presented live across NBC, NBCSN, and NBC Sports Gold. The PLL was the first professional team sports league in the US to announce a return to play, unveiling its plan for the Championship Series on the TODAY Show in early May.

Throughout the three-week period, PLL players and support staff will be on-site at the state-of-the-art Real Salt Lake Training Academy. All seven PLL clubs will be accommodated for room and board, training and competition at the facilities’ numerous playing fields.

“The support of Utah Governor Gary Herbert, Real Salt Lake Owner Dell Loy Hansen, and the larger Utah Sports Commission have been invaluable in the process of bringing the PLL Championship Series to a reality,” says PLL Co-Founder and CEO Mike Rabil. “With their world-class operators and state-of-the-art facilities we can bring our best version of the PLL to fans around the world.”

“The Premier Lacrosse League strives to be the industry leader in both innovation and on-field competition,” says PLL Co-Founder, CMO, and Atlas LC midfielder Paul Rabil. “As one of the first team sports to return to action this summer, the PLL Championship Series will give the public the excitement they’ve been craving for. As a player, I’m more than thrilled to suit up with my teammates again and begin the hunt for a championship this year.”

“The Zions Bank Training Center in Herriman was built for Real Salt Lake and the Real Monarchs to be one of the finest soccer training facilities in the world,” says Hansen. “We also constructed Zions Bank Stadium and the indoor training facility to be versatile enough to host numerous sports, including rugby and lacrosse. The Premier Lacrosse League Championship Series is just the type of national level event we envisioned. Utah’s best in class healthcare system and dedicated medical professionals have created the public health and safety environment to allow us to host this event at such a critical time. I’m grateful that the PLL has recognized Utah and Zions Bank Training Center as the place to host this historic tournament. We welcome the World’s best lacrosse players to Utah, and are confident that with the health and safety protocols in place, the event will be hugely successful.”

The PLL Championship Series will occur in multiple different phases during the three week tournament. The first week of action will see the seven teams compete in a 14-game group play format to determine seeding for the following week’s single-elimination tournament. The second week will host the beginning of elimination rounds and a championship game to crown the 2020 PLL Champion. A full tournament schedule with game times, broadcast information, and matchups will be announced at a later date. Spectators and fans will not be permitted on location. Additional tournament information can be found here.

The PLL’s COVID-19 Medical Committee has worked constantly with public health organizations over the last three months to develop protocols and procedures to ensure safety for all traveling parties. The Committee, consisting of multiple physicians and infectious disease experts, requires that PLL Championship Series participants self-quarantine for two weeks prior to travel and be tested both before and immediately upon arrival onsite. Subsequently, all parties will be subject to regular testing and symptom monitoring throughout the duration of their stay at Real Salt Lake Training Academy.

ABOUT PREMIER LACROSSE LEAGUE
The Premier Lacrosse League (PLL) is a men’s professional lacrosse league in North America, composed of 7 teams rostered with the best players in the world. Co-founded by lacrosse superstar, philanthropist, and investor Paul Rabil and his brother, serial entrepreneur and investor, Mike Rabil, the Premier Lacrosse League is backed by an investment group composed of Joe Tsai Sports, Brett Jefferson Holdings, The Raine Group, Creative Artists Agency (CAA), and other top investors in sports and media. The PLL season is distributed through an exclusive media-rights agreement with NBC Sports Group. For more information, visit www.premierlacrosseleague.com and follow on social media: Instagram (@PLL), Twitter (@PremierLacrosse), Facebook (@PremierLacrosseLeague) and YouTube (YouTube.com/PLL).

ABOUT THE UTAH SPORTS COMMISSION
The Utah Sports Commission, a not-for-profit 501c6 business league and Utah Sports Commission Foundation, a not-for-profit 501c3 charitable organization, is governed by an all-volunteer Board of Trustees consisting of statewide sports, business, community, and government leaders. The Sports Commission was created to be a catalyst for Utah in its Olympic legacy efforts and to help enhance Utah’s economy, image and quality of life through the attraction, promotion and development of national and international sports. The Sports Commission works closely with communities, sports entities, and organizations to provide event services ranging from the bid process, on-site logistics, volunteer coordination, sponsorships and promotional opportunities and other related services. For more information, visit utahsportscommission.com.