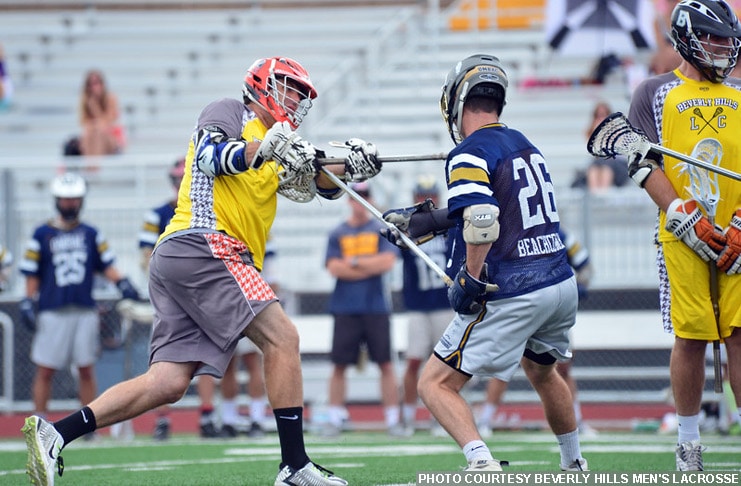 With three weeks remaining in the Southern California Men’s Lacrosse League regular season, the top spot in each division — and the first-round playoff bye that comes with it — remain up for grabs. The top three teams in each division make the playoffs, with the Nos. 2 and 3 seeds playing first-round games to advance to face the No. 1 seed the division finals.

Here’s a quick look at how each division shapes up entering the final three weekends of play:

Defending SoCal champion Beverly Hills improved to 6-1 with Sunday’s 13-6 victory over Quiksilver and holds a one-game lead over South Bay and a two-game advantage over Newport Beach. Beverly Hills will face South Bay on Sunday and will close out the season with games against the Bombers and Newport Beach, which handed the Bucks their only loss in a five-overtime marathon.

After playing host to Beverly Hills, South Bay (5-2) closes out the regular season with games against Newport and Venice. Newport (4-3) will travel to San Diego to face Beachcomber in an interdivisional game this weekend, then closes out by playing host to South Bay and traveling to Beverly Hills. Venice (2-4) is currently in fourth place and out of the playoffs but could creep back in with a strong finish against the Bombers at home, then at San Diego and closing out the season at South Bay.

The San Diego Lacrosse Club and 40 Thieves are in a dead heat for first place with 6-1 records, though 40 Thieves does hold the tiebreaker by virtue of a 14–8 victory over Sam Diego earlier. The teams square off again this weekend, and a victory by the Thieves would all but clinch first place and the first-round bye.

Quiksilver (3-3) currently owns the No. 3 spot, well ahead of Beachcomber (1-6) and Adrenaline (0-7), and will have every opportunity to lock down that seed in the playoffs in the next three weeks. Quiksilver faces Adrenaline, 40 Thieves and Beachcomber to close out the season.

Beverly Hills has won the SoCal title two years in a row. Last year, the Bucks lost to Olympic of San Francisco in the state championship game. Two years ago, they fell to Barbary Coast of San Francisco.