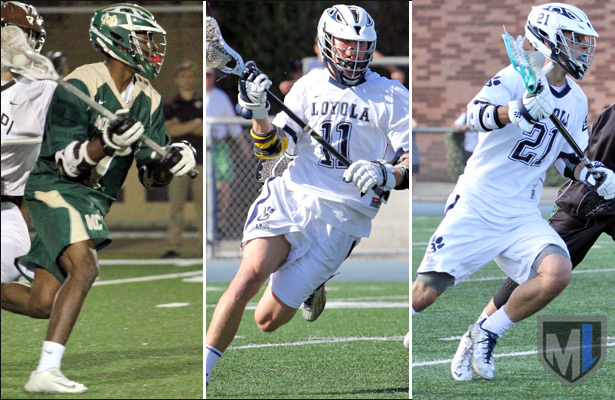 The list of junior middies to watch in the L.A./Ventura area in 2016 features two players committed to blue-chip NCAA Division I programs and another on the verge of a break-out season. Beyond those three, though, there remains a long list of third-year players who already have considerable varsity experience and accolades.

Here are some of the top junior middies to watch in 2016:

Twice named second-team All-Bay League in two seasons for the Mustangs, Bonner might be ready to contend for first-team honors as a junior. After scoring 30 goals and recording 14 assists as a freshman, the 6-foot, 180-pound Bonner produced 35 goals and 25 assists last spring. With a 4.5 40-yard dash time to go with that size, Bonner is a tough cover up top. And Coach Aaron Karsh said Bonner has developed a strong right-hand to complement his great left.

Cubs coach Seth Cohen calls Mora “an old-school, two-way middie,” saying, “He can D you up, run the break and can hit the big shot. He’ll beat you to the ground ball; he can shake-and-bake; and he can score from inside or out.” All of that culminated last summer in a commitment to NCAA D-I Maryland. After posting seven goals, two assists and 28 ground balls as a freshman, Mora followed with 20 goals, 12 assists and 41 ground balls last year, earning second-team All-Mission League honors.

Another member of Loyola’s stellar Class of 2017, Partamian erupted for 35 goals and 20 assists last spring after a relatively quiet freshman year on varsity. “Partamian is a downhill dodger with great size and speed,” Coach Cohen said. “Once he gets a head of steam going, it’s hard to stop him!” He was named first-team All-Mission League last spring, then turned in an all-star performance at the Maverik Showtime recruiting event in Connecticut over the summer. That earned him an offer to play at Syracuse, which he accepted, committing in July.