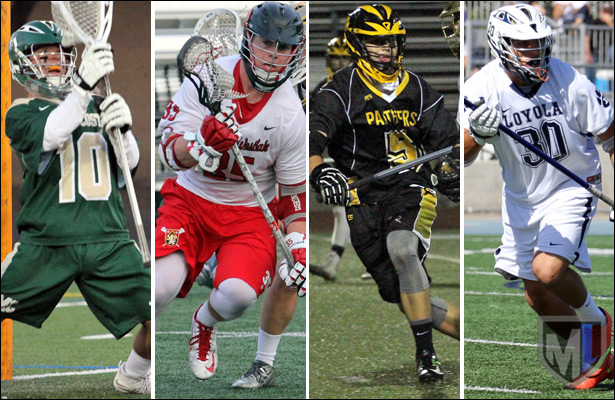 We wrap up our look at the top seniors to watch in the L.A. area with a look at goalies, faceoff middies and long-stick middies — the senior specialists that are crucial to gaining possession. Like all positions in the series, the list of candidates was long, but some of these guys simply stood out.

Here are some senior specialists to watch in 2016:

Van Sickle posted a .720 save percentage and 6.93 goals-against average last season, helping the Mustangs to their first winning record since 2011. “He was fantastic for us last season,” Costa coach Aaron Karsh said. “I’m looking forward to improved team defense with his leadership this season.” Van Sickle is committed to NCAA D-I Drexel.

The Princeton-bound Thompson has been terrorizing local faceoff middies since he was a freshman, when his work at the dot helped the Wolverines win the US Lacrosse Southern Section North bracket and build a halftime lead over St. Margaret’s in the section final before the Tartans rallied. Last year, Thompson added another dimension to his game, becoming an offensive threat in the half field with 49 goals and 23 assists.

A four-year varsity player, Jimenez was named second-team All-Marmonte League last spring. He is committed to NCAA D-I Cleveland State and will be a freshman when the Vikings play their inaugural season next spring. Jimenez last year was credited with 29 caused turnovers as part of a Panthers’ defense that allowed only 4.26 goals per game.

A physical presence wherever he lines up, Neblina has been a versatile weapon for the Cubs the last two seasons. He was first-team All-Mission League at LSM last year after collecting 55 ground balls in 17 games. As a sophomore, he was credited with 20 GBs and also won 53 percent of his faceoffs (29 of 55).