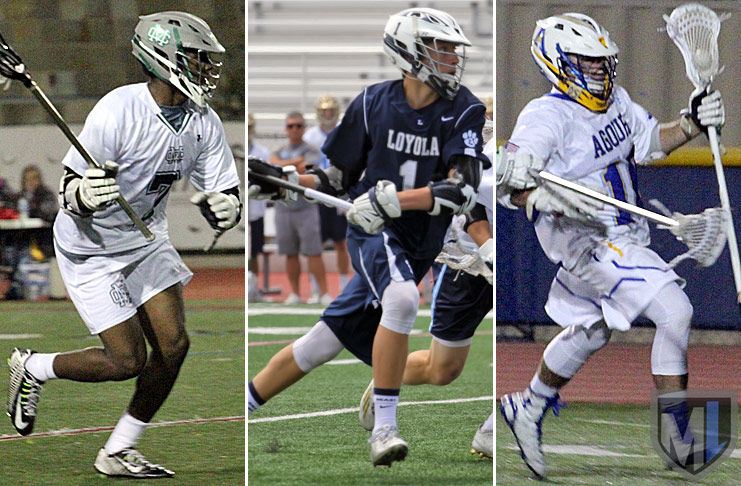 As we continue our look at players to watch heading into the 2017 season, we move to senior middies, a list with some very familiar names — a few of these players have been making an impact since early on in their high school careers.

It would have been very easy to grab last year’s list of junior middies to watch, update a few stats and accomplishments and call it a day. The Loyola duo of Jonathan Partamian, committed to Syracuse, and Ryder Mora, committed to Maryland, certainly are worth watching in their senior seasons.

But this year, MaxLax is into spreading the love, so while acknowledging everything Partamian and Mora have accomplished — Partamian was named US Lacrosse All-American last year, and both were named first-team Greater LA South All-Area — here are a few other senior middies to watch.

Yes, Bonner was the third junior middie to watch on last year’s list, but with the graduation of Zane Crandall (Lafayette), it will be worth watching how much Bonner blossoms. “Casey continues to make jaw dropping plays every time he takes the field,” Mira Costa coach Aaron Karsh said. “This year is his time to shine.” Bonner was first-team all-Bay League and first-team Greater LA South All-Area last spring.

O’Hanlon has been a solid performer in a stacked Loyola lineup for a couple of years now, but it was late in last spring’s run to the US Lacrosse Southern Section championship that he asserted himself as big-time performer. O’Hanlon totaled eight points in the Cubs’ final three playoff victories, including two goals and two assists in the title-game win over Corona del Mar. Named first-team all-Mission League and second-team Greater LA South All-Area, O’Hanlon is committed to Division III Babson.

Shargel improved his offensive output from 22 goals as a sophomore in 2015 to 63 goals in 17 games last spring, earning him first-team all-Marmonte League and US Lacrosse All-American honors. He scored three goals or more in 13 consecutive games, including three in a row with goals. At only 5-foot-7 and 170 pounds, Shargel plays with quickness, toughness and relentless off-ball movement. He plans to play collegiately at Onondaga CC in Syracuse, N.Y., with hopes of eventually transferring to an NCAA D-I school.