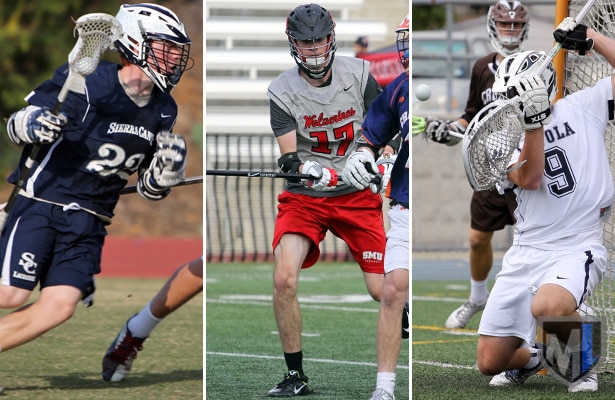 When we started compiling our list of junior specialists, it wasn’t hard to settle on a goalie. Joe Theuer has backstopped Loyola to a 30-9 record in his first two high school seasons. There certainly are other junior goalies worth mentioning, but Theuer stands out.

Here is a look at some other junior specialists to watch in 2016:

In two season as Loyola’s starting goalkeeper, Theuer has been named first-team All-Mission League twice and U.S. Lacrosse All-American once. He has a career save percentage of .569 — it was .596 last spring — and a career goals-against average of 8.9. “Joe is a great ball stopper,” Loyola coach Seth Cohen said. “He’s a big kid with quick hands and good fundamentals. Last year he kept us in a number of close games with some incredible saves!.”

Though he was named first-team All-Gold Coast League at attack last spring, Rosberg actually does a little bit of everything — playing attack, midfield and facing off. He is a member of Goon Lacrosse and the L.A. Heat 2017 club teams.

Named second-team All-Mission League as a sophomore, Houska stands 6-foot-4 and has great reach. Put a 6-foot stick in his hands and he can be very disruptive, both on the ball and sliding to help.