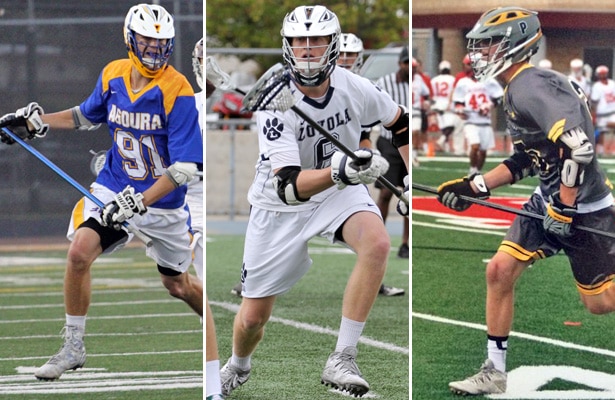 To play defense in the Marmonte, Mission or Bay leagues as a freshman or sophomore is a tall task. To do it well enough to earn accolades ahead of bigger, more experienced athletes is an accomplishment worth recognizing. The three junior defenders featured here were pulled from a long list of candidates for exactly that reason — they achieved some pretty impressive things as sophomores playing in the three toughest leagues in the area.

Here are some of the top junior defenders to watch in 2016:

Though Dankenbring played mostly longstick middie as a sophomore, the Chargers will look to him this spring to fill the void left when All-American Jonah Swigart graduated and headed off to Syracuse. Those are big shoes to fill, but at 6-foot-4 and 190-pounds, Dankenbring certainly looks the part. Agoura assistant coach Jack Zorzi says, “Taylor uses his length and impressive array of checks to dislodge the ball, and a smooth stick and long stride to transition the ball from defense to offense.” He has yet to commit to a college program, but Zorzi said a half-dozen D-I programs have expressed interest since Dankenbring’s summer playing for the LB3 National 2017 club team.

A two-year varsity starter for the Cubs, Mohler was a first-team All-Mission League selection last spring after earning second-team honors as a freshman. He collected 54 ground balls in 19 games last year, following up 27 ground balls in 20 games his first year. Over the summer, the 6-foot-3, 190-pound Mohler committed to NCAA Division I St. John’s. “He’s a long, lanky defenseman with an unbelievable stick,” Loyola coach Seth Cohen said. “He’s a vacuum cleaner on GBs, can handle in traffic, and if you don’t protect your stick, he’ll take it right away!”

Like the other two featured junior defenders on this list, Phillips projects as more of a long-stick middie at the next level. But he’ll play everywhere for the Panthers this season, coach Lane Jaffe said, including some time on offense and possibly taking some faceoffs. “He is the best LSM in L.A., if not all of the Southern Section, Jaffe said. “He is so fluid with getting the ball off the ground and sparking transition.” Phillips committed to NCAA Division I Bryant University this summer after earning second-team All-Bay League last spring. He also was second-team all-league as a freshman.