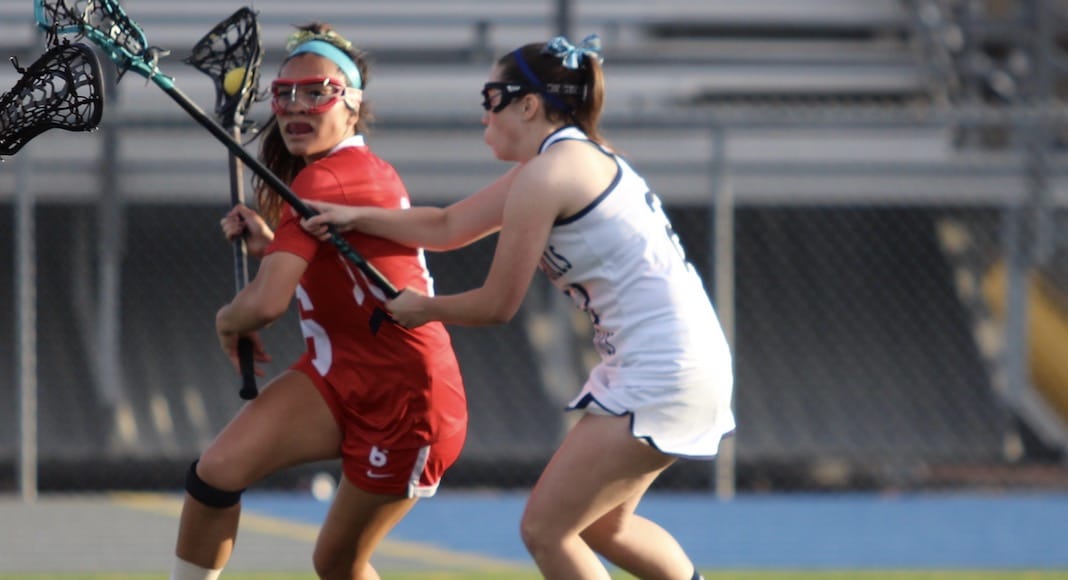 Newport Beach –  The Tesoro girls lacrosse team traveled to Newport Harbor on Tuesday in search of its first win of the season.  The Titans survived a tight game, a few close calls, and unlike U2 found what they were looking for when Ava Pinto scored the game-winner in the first overtime.

Pinto’s only goal of the game, came after the Titans stopped a free possession, and it could not have come at a bigger moment.   The No.10 Titans topped the No.6 Sailors 10-9 and are now in the win column.

Meanwhile, the Sailors (2-4) dropped their second one-goal heartbreaker in a row. The Sailors lost to Park City, UT 13-12 last Saturday at home.

It was a game full of runs for both teams, as the Titans erased a 2-1 deficit to lead 5-2 in the first half, forcing Newport Harbor coach Brooke Martini to take a timeout. The timeout was beneficial, as the Titans didn’t score the rest of the way, and the Sailors put away two more goals to go into the second half only down 5-4.

That goal, however, turned out to be the last goal the Sailors would score, as they went scoreless in the final 19:42 of the game. The Titans eventually forced overtime and made a huge stop defensively.

With 40 seconds remaining, the Sailors earned a free position shot and had Caroline Farley take it. But unlike last Thursday’s game against San Juan Hills, where Rothbard scored the game-winner in overtime, the shot was saved and the Titans set the stage for Pinto’s game-winning goal.

Hannah Maurer led the Titans with four goals while Paris Melberg added three. Pinto and Kaitlyn Shay each had one goal while goalie Leah Olsen made 13 saves.

For Newport Harbor, Farley led the way with three goals while Rothbard had two. The Sailors also got a goal apiece from Miller, Knipp, Joelle Rothbard and Kobe Richardson. Goalie Willa Rath made seven saves for the Sailors.