Phillips Scores in Second OT to Lift Peninsula Past Crespi 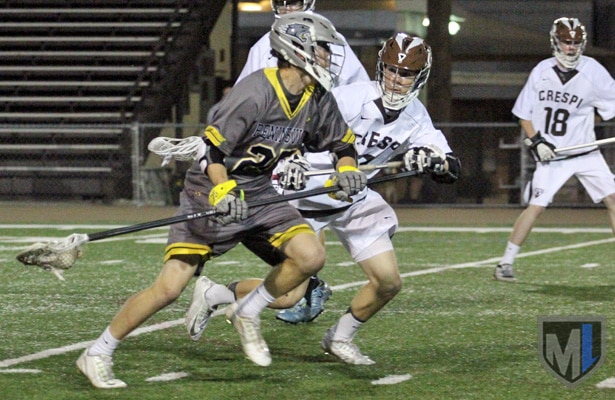 Junior LSM Scott Phillips scored his third goal of the game 39 seconds into the second overtime Thursday night, giving visiting No. 8 Peninsula a 10-9 victory over No. 15 Crespi. The teams traded leads throughout, with neither leading by more than two goals at any point.

Phillips’ sudden strike came after he won the face-off — he won 14 of 16 in the game — and drew a short-stick defender. He took his defender to X, dodged up the right side and shot high to low into the far netting.

Crespi had forced overtime with a long-pole goal of its own. After Peninsula (4-1) had taken a 9-8 lead with 1:30 to play on a transition finish by Kyle Beachboard, Peninsula won the ensuing face-off and tried to run out the clock. But Crespi goalie Noah Davila stopped a Panthers’ shot — he had 16 saves in the game — and made an outlet pass to junior LSM/D Joseph Abu Dalu. Racing up the left sideline, Abu Dalu beat the Peninsula ride, cut across the field, faked high and finished low, tying the score 9-9 with 29 seconds left.

Phillips filled up the scorebook with a well-rounded effort — three goals, 14-of-16 face-off wins and 11 ground balls.

The Celts remain winless and travel to meet No. 4 Palos Verdes next week. Six of Crespi’s losses have come to teams currently ranked in the Top 12 of the US Lacrosse/MaxLaxLA coaches poll.