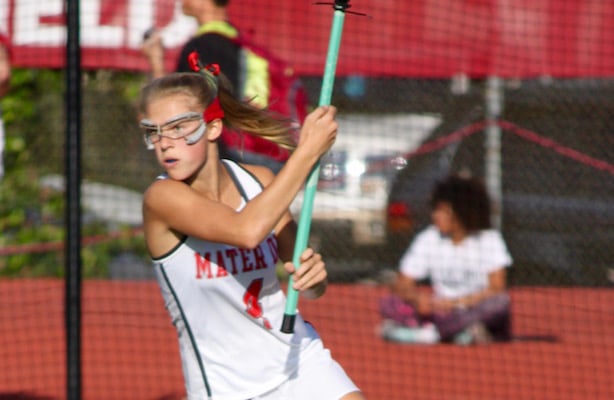 “I really just wanted a high academic school because I pride myself on my academics. I study really hard throughout high school. When I went out and visited in January, it was the perfect fit, everything I wanted, everything I loved just all in one school,” Smith said.

Smith’s Aces West club coach Lauren Ciccomascolo said the she think’s that one of the main things that drew Dartmouth’s attention is Smith’s ongoing and nearly daily improvement.

“Peyton just wanted to learn and she did that everyday. Every time I see Peyton play she is better than she was the day before. This was one of the first things I said to Danielle Spencer the Head Coach over at Dartmouth and I think it stuck with her,” Ciccomascolo said.

Smith’s thank-you’s ranged from her parents, to Ciccomascolo, to Ruth, to Mater Dei coach Chloe Silance, to Kate Hick, to her teammates on Mater Dei and Aces and to everyone who had her back.

“Peyton is becoming one of our leaders on attack. She always has been a leader in putting the ball in the back of the cage, but she’s starting to increase her vision and IQ on the field and start to be able to set up her teammates for success as well as put herself in positions to be successful,” Silance said.

Last year, Dartmouth went 11-5 overall and 5-2 in Ivy League play. The Big Green lost to second-seeded Penn in the semifinals of the Ivy League Tournament 16-14.