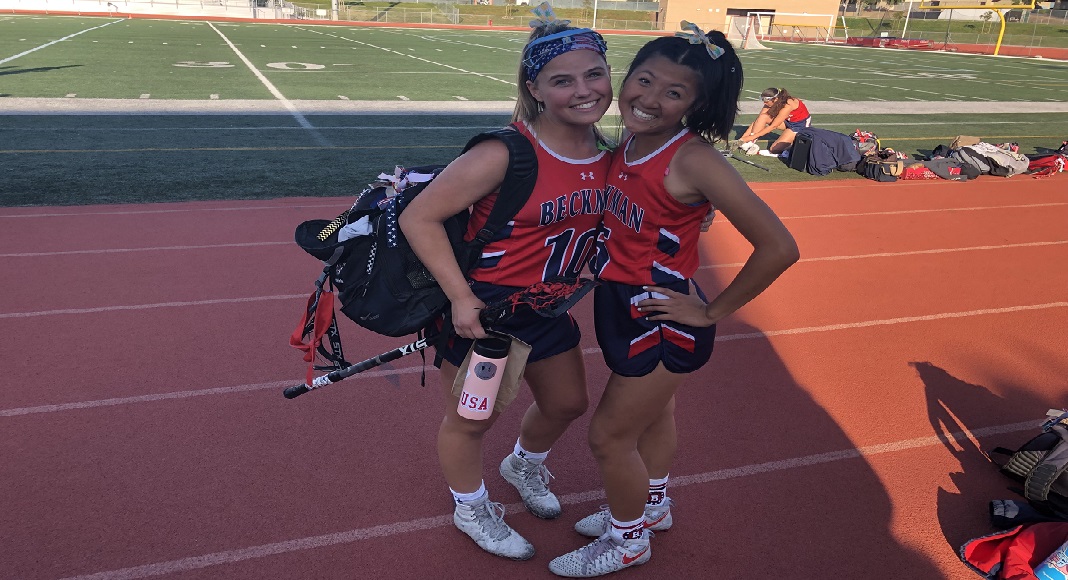 Julia Patrick (pictured left) scored her sixth and final goal with 1:22 left in the game to help the Beckman girls lacrosse team outlast University 12-11 on Friday at University High School.  The win keeps the Patriots all alone in first place in the Pacific Coast League and extends their PCL winning streak to 20 games, dating back to 2017.

“I think we expected this to be a one goal game. I can remember 10 years ago this would be [a] 19-2 [score] and they [University] have built a really strong program. We told the kids focus on playing well, don’t worry about the score and we did a great job on draw possessions,” Patriots assistant coach Tom Messmer said.

University was led by Kaylor Chott who had four goals while Mya Wang had three goals. Grace Calunga had two goals for the Trojans while Makenzie Kaufman and Mackenzie Field each had one goal.

Beckman led throughout most of the game but could not shake the dogged Trojans.  The Trojans finally got their first lead of the game with 15:08 left in the game when Wang  tallied to make the score 9-8.  University continued to apply pressure and built their lead to 11-9, putting the Beckman streak was at risk.

However, the Beckman defense clamped down and the offense chipped away until DoKanh leveled-off the score at 11-11, which set up Patrick’s game-winner.

The Trojans got one more chance at sending the game into overtime, as they got the ball off of a Patriots’ turnover with eight seconds left. But the Trojans were unable to get a shot off, as the Patriots stormed the field in relief, knowing that they beat their rival in a crucial league game.

“I think it was a great game, back-and-forth. It was always super close and nobody took a commanding lead at any point in time. I honestly feel the game could’ve gone either way for either team. It was a tough loss, but it is what it is,” Trojans coach Martin Stibolt said.

The two teams will meet again on Thursday April 25 at Beckman.

It’s not surprising that Patrick stepped up in the big moment for Beckman.  She has stepped into a leadership role this season with increased goal production to help fill the void left by Carly Tobias’ foot injury,  Patrick now has a team-leading 41 goals.

“Those sometimes have a silver lining. Julia has really stepped up and Lauren’s taken a leadership role. Carly’s not on the field, but Carly’s been a huge piece to the sideline and she’s turned into an assistant coach. It’s just one of those things, you live with it, everybody else steps up and that’s what’s happened,” Messmer said.