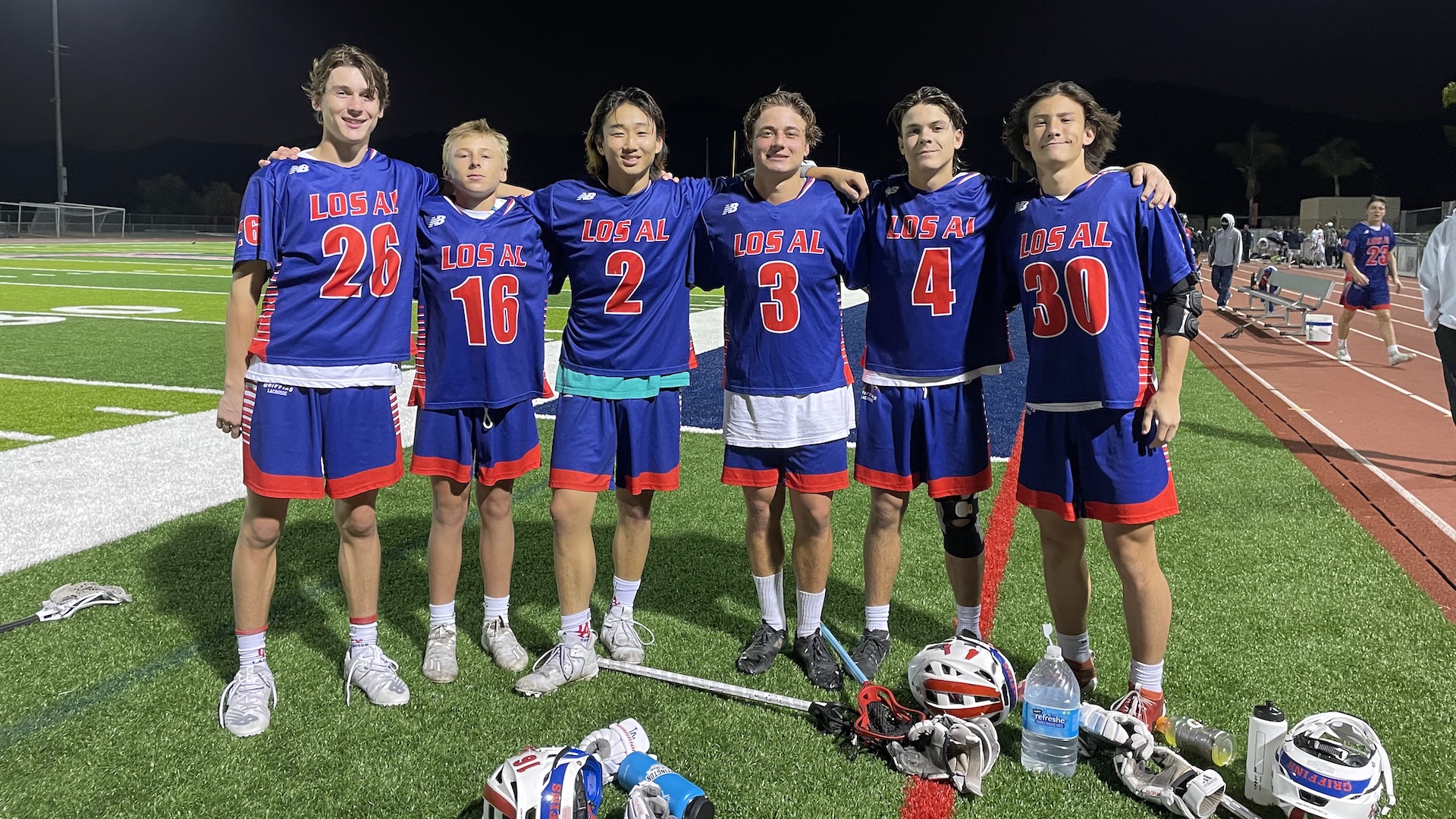 Sean Park scored six goals and assisted on another to lead the Los Alamitos boys lacrosse team to a 13-10 road win over Tesoro on Tuesday night.

Los Al got off the bus firing on all cylinders and jumped on Tesoro early and often.  The Griffins opened a 4-0 lead after Q1 and ultimately expanded that to 8-0 in the 2nd quarter before Tesoro cut it to 8-2.  The half time score was 9-2.

Credit to the Los Al head coach Matt Cunniffe and his staff for having the Griffins jacked up and ready to play.  Even the bench had it going in terms of enthusiasm and not in a fake way.  These coaches had them fired up for this one and they shot the ball extremely well all night.  This was not a one-way effort.  The Los Al D had it going for sure, holding a talented Tesoro team to just two goals in the first half.

Credit to Tesoro Coach Scott Grubert and his staff as well for not letting the Titans fold after such a slow start.   Tesoro came out swinging in the second half to make it a game. That’s not an easy thing to do when you fall behind 8-0. But the Titans kept coming, no quit in this team.

Tesoro scored the first two goals of the second half to quickly cut the score to 9-4 and having scored four of the last five goals were on a roll with plenty of time to play.  Jackson Brady‘s (16 saves) play in the cage helped keep the Tesoro comeback hopes alive.

Los Alamitos regained the momentum with one of the best lacrosse plays of the night.  Ed Shean came up with the ball in the defensive end after a caused a turnover and a true fast break was on.  Shean with the ball and five-yard lead on a fast break spells trouble for any opponent.  He drew his man and hit the point perfectly. The point man hit a nice diagonal look to Park who froze the goalie and stuck it over his off stick shoulder.  Park has excellent hands and that play made it obvious.

With the score 10-5 in Los Al’s favor, Tesoro continued to chip away but could not complete a comeback Aidan Farris caught fire in the second half for Tesoro with two goals in the third quarter and one in the 4th.  A Radyn Badraun goal for Tesoro cut the Los Al lead to 13-8.  Cole Pollard made it 13-9 and Charlie Richardson made it 13-10 which was the final.

Shean had one goal and three  assists for Los Al while Drew Anderson had two goals, but the story of the night was Park.   He was straight up nasty and fun to watch! I would have bought a ticket to see this kid go off.   Going to guess this youngster plays lots of box lacrosse.  Very good in and out dodger to keep his hands free, he was able to play with two hands on the stick all night thus always being a threat to feed or shoot at all times.  Had a very good defender on him as well.

On one play Park picked up a ground ball at the sideline, caught a Tesoro defender on a bad approach and cut on a dime with a nice swim move. He got to five yards 1 on 1 with the goalie and came up with an excellent finish, changing levels low to high.  Super slick play yet very under control at the same time. The right kind of flash.

No clue how I haven’t seen this kid before.  Haven’t seen a Los Al game since 2019 when Shean went bonkers for six goals in a one goal win vs Santa Margarita.  Shean’s highlights that night included a coast-to-coast goal with seconds to play.  So I don’t see all that many Los Al games but seem to pick some doozies.  Park is talented, just based on his skills this was no fluke night, this kid is very good and did his thing like a baller tonight.