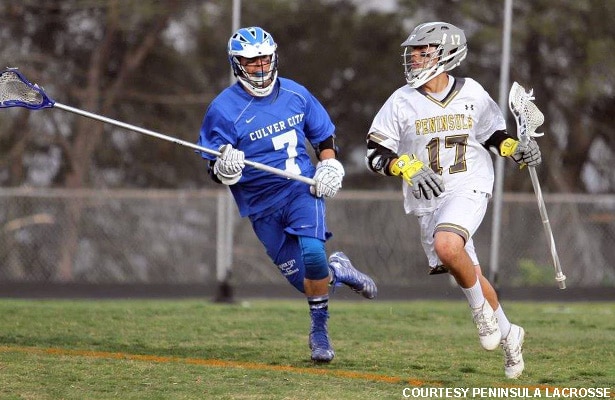 Against Santa Monica on Wednesday, Tseng had five goals and three assists and Beachboard had four goals and two assists to pace the offense. The Panthers led only 3-2 after one quarter but erupted for eight unanswered goals in the second.

Friday, the Panthers again rode a big second quarter to a lead they never relinquished in a 17-9 win over visiting Culver City. The score was tied 4-4 after the first period, but a 6-2 burst in the second gave Peninsula a 10-6 halftime lead, and goalie Choi kept the Centaurs in check the rest of the way.

Tseng (5g, 4a) and Beachboard (4g) matched their first-game scoring totals in this one, Landon (3g) and Nunziati (2g) contributed multiple goals, as well. Landon also registered 17 faceoff wins for the Panthers, and junior LSM Scott Phillips filled up the stat sheet with a goal, four assists and 11 ground balls.

The Panthers play host to Agoura — which lost 6-5 in triple-overtime at Harvard Westlake on Saturday — on Tuesday at 3:30 p.m.