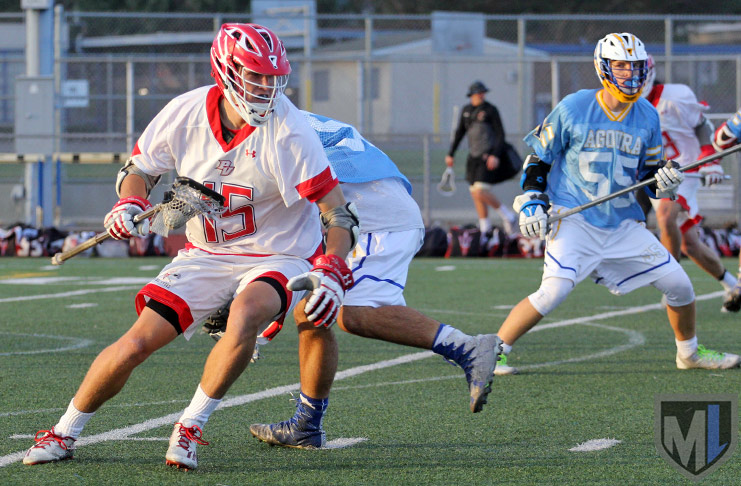 Junior middie Beau Sabosky scored three of his four goals and assisted on another in the first half Saturday, helping No. 1 Palos Verdes overwhelm No. 4 Agoura early en route to a 16-8 victory in the US Lacrosse Southern Section North semifinals at Culver City HS.

The Sea Kings (17-4) led the Chargers 10-1 at halftime in advancing to the LA title game for the eighth consecutive season, seven under head coach Jimmy Borell. Palos Verdes will face No. 2 Loyola, a 13-6 winner over Oaks Christian in the first semifinal, for the LA championship Wednesday at Mira Costa HS (4 p.m.). The same two teams met at Mira Costa for the title last year, with the Cubs winning in overtime.

“We’re pumped for this,” Borell said after Saturday’s semifinal win. “This is what we circle all season. It’s what we work for and what we’re prepared for, so we’re looking forward to it.”

Saturday, the Sea Kings jumped all over Agoura early, dominating possession and building a 4-0 lead after one quarter that they more than doubled by halftime.

“Against an offensive team like that,” Agoura coach Sean Lindsay said, “with a lot of firepower, when you get your possessions on O, you gotta take advantage of them. I thought we were a little hesitant, a little deer-in-the-headlights offensively.”

Palos Verdes capitalized on that hesitancy and built a commanding lead. The Chargers righted themselves a bit in the second half, scoring three quick goals to pull within 11-4 with just under eight minutes left in the third.

“We were a little sloppy in the second half tonight,” Borell said, “but it’s a little tough, when you’re up 10-1 at halftime, having your head in the game. They (Agoura) came back and fought hard out of the gate. All the credit to them and their coaching staff. They competed; they took it to us in the second half.”

“I’m proud of our guys,” Lindsay said. “Nobody really put us in this position at the beginning of the year. We had a lot of young guys that stepped up, and the seniors, I’m glad that they had such great memories that they’ll take with them the rest of their lives.”

Lindsay said reaching the semifinals was a huge step for a program that has been a perennial playoff qualifier but hasn’t advanced past the second round in Lindsay’s seven seasons at the helm.