Palos Verdes Too Much for Oak Park in 11-3 Win 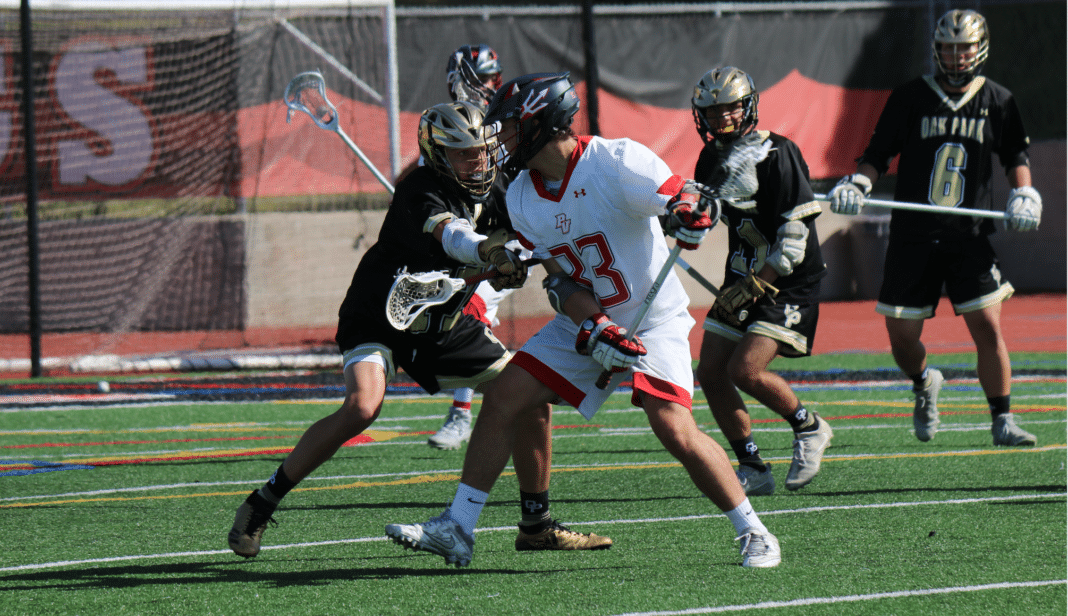 In a bout that featured two Top 10 heavyweights that hadn’t lost in a while, No. 2 Palos Verdes steamrolled visiting No. 5 Oak Park on its way to an 11-3 victory Thursday afternoon.

With the toughest stretch of the schedule already behind them — one that included huge wins over OC No. 1 St. Margaret’s and No. 2 Foothill — the streaking Sea Kings were rolling, having won six in a row. However, Oak Park came in riding a seven-game winning streak of its own, including wins over LA No. 7 Agoura and No. 8 Oaks Christian.

Unfortunately for the Eagles, their hard-nosed defense was upended this time by Palos Verdes’ predatory offense. The Sea Kings’ dominance at the dot also served them well, a strategy head coach Jimmy Borell knew they had to execute from the start.

“Our face-off guys did really well today, and I think that was important,” Borell said. “We knew (Oak Park) was going to double- or triple-pole the wings, so we needed to have an answer for that. But Colin Fitt and Cole Clinton really stepped it up today.”

Overall, Palos Verdes won 11 of 17 face-offs, which allowed them to push tempo and keep the Oak Park defense on its heels.

The Eagles’ defense responded well in spurts, holding the Sea Kings in check for extended periods of time. After Bryce Hardy (1 goal, 1 assist) gave Oak Park a 1-0 lead early on, Palos Verdes scratched out two goals and led only 2-1 going in the second.

Oak Park evened the score at 2-2 to open the second period, but its defense began to waver under PV’s possession advantage, and the Sea Kings scored five unanswered goals to go up 7-2 at halftime. The Oak Park defense held up in the third, allowing only one goal, but the offense couldn’t keep pace.

To the credit of Palos Verdes’ defense and ball possession, the Eagles — who averaged nearly 12 goals per game during their winning streak — didn’t average even one per quarter on Thursday. Attackman Tyler Bradbury (Utah) and freshman Sam Peter each scored one, joining Hardy on the scoresheet.

“I’d like to see our offense be a little cleaner,” he said, “and on defense, I would just like to see a little more intensity out of them. But I think defense has been our backbone all year, and we just have to continue never being satisfied with where we’re at.”

Despite the lopsided loss, Oak Park coach Tarik Ergin hopes his Eagles cross paths with Palos Verdes again in the playoffs. However, he also said his team needs to learn how to take control and be more assertive, especially against a powerhouse like PV.

“We have to play with confidence that we can go out there and play our style, our game, and succeed against good teams,” Ergin said.

Next up, Palos Verdes will play host to San Clemente (8-6) on Saturday — the Tritons lost 6-3 Thursday to No. 1 Loyola — then play two games in the Bay League tournament next week.