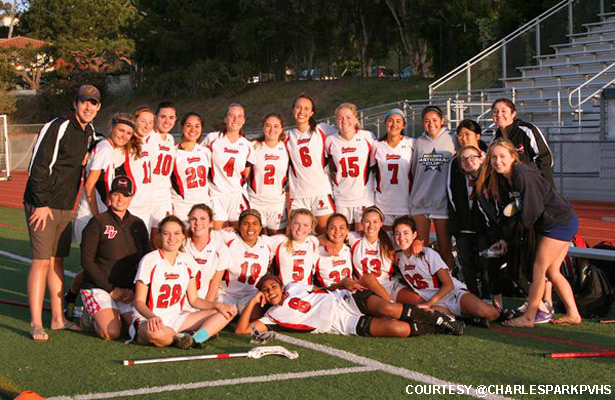 The Palos Verdes girls lacrosse team has reached the US Lacrosse Southern Section title game twice since the program’s inception, losing to the Orange County champion both times. PV also has won the Bay League championship four times, the last coming in 2012.

But the past three seasons have seen three second-round playoff exits, while rival Redondo Union has ascended.

Hewitt is entering her 12th season with the program. Last year she guided PV to the No. 4 seed in the South Bracket of the Los Angeles playoffs and a first-round playoff win over Peninsula (pictured above). But the Palos Verdes girls lost to Redondo 21-3 in the second round — their third lopsided loss of the season to the Sea Hawks — to finish 6-9 overall.

Hewitt took time out to share some thoughts on her team heading into the 2016 season.

Our team is returning most of our starters, including our highest scorers (seniors Landry Carrera and Cassidy Najarian), and we will be fielding one of the most talented PV teams since 2012. Our expectations are to finally win [the] Bay League back from Redondo!

Captain and senior Landry Carrera will be the playmaker on attack. She has the skills and the lacrosse IQ to be a threat, both as a player who scores and who dishes the ball to teammates. We are excited to see what she will do this season.

Cassidy Najarian, midfielder and senior, is a four-year varsity player who transfers in from soccer to take draws and power up the midfield.

Juniors Alison Cromer and Davis Anderson have both been working hard in the offseason and will be key players.

The real surprise this year is a very strong and talented freshman class, many of whom have made the varsity cut.

“… we can stay focused and driven, playing our best lacrosse, through May.”
— Coach Marissa Hewitt