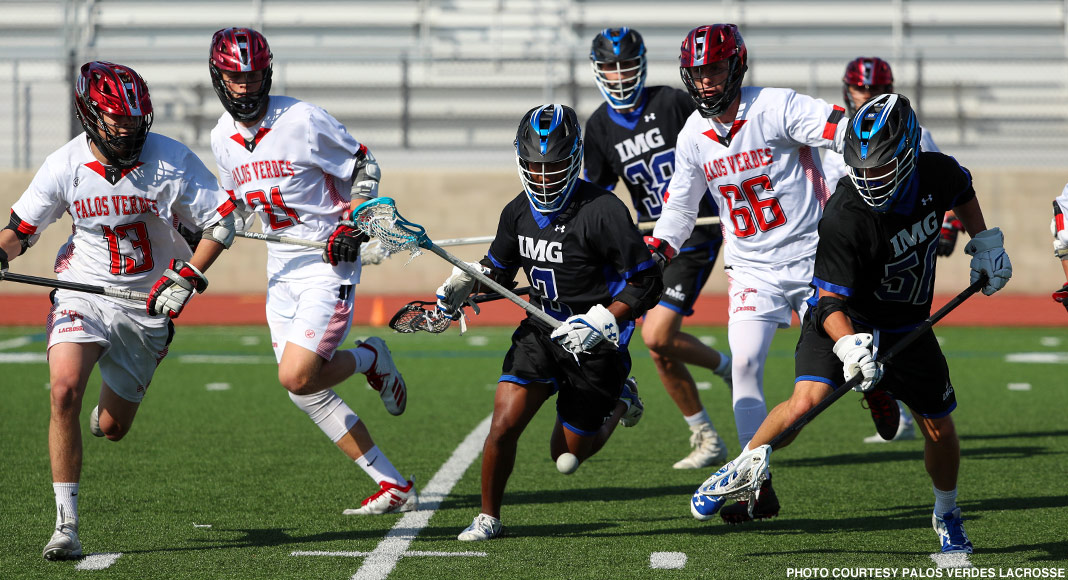 No. 1 Palos Verdes suffered its first loss of an impressive 2019 campaign Monday, losing a wild, 20-15 contest to IMG Academy (Fla.) at Palos Verdes High School. The Sea Kings are now 9-1.

IMG Academy, which beat Torrey Pines 10-7 on Friday, is averaging 16 goals per game against teams such as Westminster School (Conn.), Trinity-Pawling (N.Y.) and Phillips Exeter (Mass.). Only Trinity-Pawling had scored in double-figures against the Ascenders until Monday. IMG, whose game at La Cost Canyon on Saturday was cancelled due to a reported illness that swept through the Mavericks’ roster, travels with a roster of 26 players, 14 of whom are post-graduates.

The teams were neck and neck early on Monday, with the Ascenders holding a slim 3-2 lead after the first quarter. Brad Sharp (4g, 3a) and Landon Smith (2g) scored the Sea Kings two goals in the frame.

IMG won 28 of 38 face-offs in the game behind senior Georgetown commit Carson Milburn, and that possession edge enabled the Ascenders to get off to fast starts in all four quarters. The Florida power went on a 4-0 run to open the second quarter and ended the first half with an 8-5 lead. Sharp, Smith and Jake Jellison (2g) scored for PV.

IMG Academy opened the third quarter with another 4-0 run in the first three minutes to blow it open. The Sea Kings trailed 16-10 entering the fourth. Luc Charbonnier (3g, 2a) led PV in scoring in the third with two goals and an assist.

Two goals in the first minute of the fourth period put the Ascenders up 18-10, and a 5-2 Sea Kings rally behind Birk Swan (3g, 1a), who scored two goals within 90 seconds of each other in the period, produced the final score.

Jake Allegart (1g, 1a), Michael Nagy (2a), and Jacob Ramirez (2a) rounded out the impressive offensive output for Palos Verdes. Defensively, Kyle McCann and Joey Quinn combined for 21 saves on 41 shots on goal.

The Sea Kings will look to get back in the win column on Thursday at Bay League foe Peninsula at 3:30 p.m. IMG Academy heads back to Florida and will face Viera (Fla.) at home on April 6.

Information and photo for this report was contributed by Palos Verdes Lacrosse and culled from both Inside Lacrosse and @IMGLacrosse on Twitter.