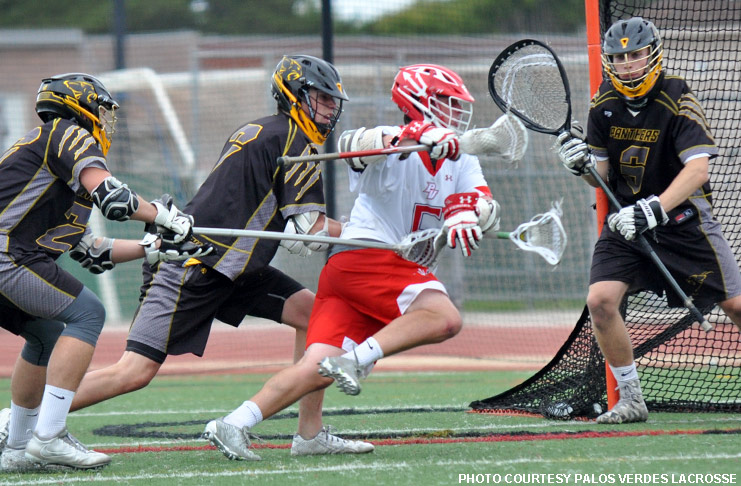 With an overwhelming advantage at the face-off dot and and equally dominating performance collecting ground balls, No. 1-seeded Palos Verdes made short work of No. 8 Newbury Park on Thursday, posting a 16-4 victory to advance to Saturday’s semifinals.

The Sea Kings (16-4), who have now won seven in a row, will face No. 4 Agoura (15-5) Saturday at 7 p.m. Culver City HS. It is their sixth consecutive trip to the US Lacrosse Southern Section North semifinals.

Agoura advanced with a 6-5 win over No. 5 Oak Park. Earlier this season, Palos Verdes defeated the Chargers 15-5. The PV-Agoura game will follow the first semifinal between No. 6 Oaks Christian (16-4) and No. 2 Loyola (18-4). Oaks Christian upset No. 3-seeded Harvard Westlake 4-3, and Loyola easily handled No. 7 Thousand Oaks, 17-2.

Thursday, Palos Verdes jumped out to a 3-0 lead and led 4-1 after the first quarter as junior Colin Fitt won five first quarter face-offs. He won four more in the second period, as the Sea Kings stretched their lead to 8-2 at the break. Newbury Park twice pulled within five goals in the second half, but Palos Verdes continued to gain possession and build on its lead.

Borell said the Sea Kings collected 44 ground balls to 14 for Newbury Park, which spent much of the game on defense, packed into a zone. Palos Verdes was able to move the ball, eat up clock and find clear looks at the goal.

Goalies Kyle McCann and JJ Barry each made four saves.