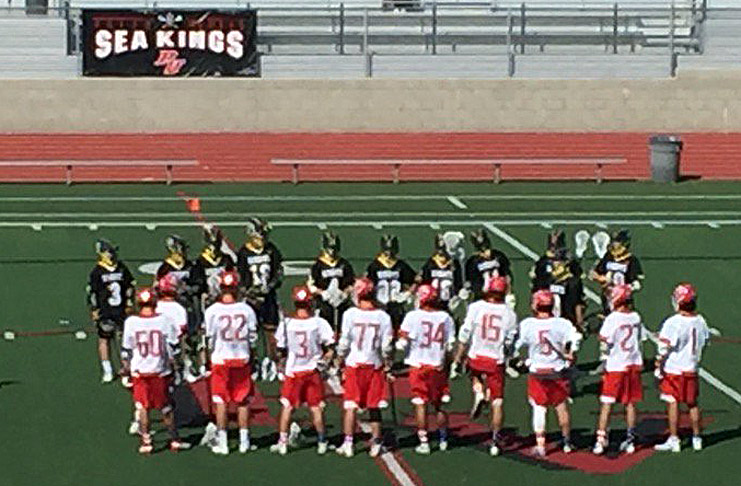 Third-ranked Palos Verdes shut down the Foothill offense Thursday, beating the Knights 8-3 and improving to 5-2 on the season. It was the Sea Kings’ second consecutive victory over Foothill, which entered the season ranked No. 2 in the Orange County coaches poll.

“Our defense was unbelievable,” coach Jimmy Borell said via text, singling out his close defenders. “[Matt] Nagy, [Hart] Swan, [Kyle] McBride — [Foothill] had one man-up goal, one fast-break and one six-on-six goal.”

Palos Verdes took a 2-1 lead after one quarter on two goals from Sabosky, both assisted by Austin Lowi, then extended the lead to 4-1 at halftime on unassisted goals from Jake Nolls and Gressett.

After Gressett scored again early in the third quarter to make it 5-1, Foothill scored twice to climb back to within 5-3. Gressett then scored his third of the game off a turnover, giving the Sea Kings a 6-3 lead heading to the fourth quarter.

Gage Rowland stretched the lead to four in the fourth, forcing a turnover on the ride, snagging the ground ball and finishing it himself. Gressett’s fourth, assisted by Jack Collins, provided the final margin with about five minutes to play.

The Sea Kings are now 2-1 this season against teams ranked in the Orange County preseason coaches poll, having opened with an 8-7 loss to St. Margaret’s, then edging Santa Margarita Catholic 8-6 before Thursday’s win.

In fact, until that PV win last season, Foothill had won 21 in a row against teams from the LA/Ventura area, including six in section title games. This season, the Knights have lost to both Palos Verdes and Loyola.

Monday, Foothill (5-4) begins a three-game stretch of home games against Wheat Ridge (Colo.), Santa Margarita and San Clemente before traveling to face Torrey Pines on April 8, then embarking on a three-game road trip to Maryland.