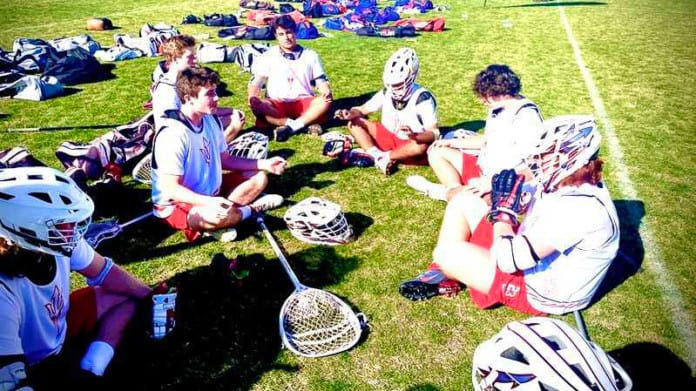 The Palos Verdes boys lacrosse seniors sat together before a game. Like many other teams, the Sea Kings were holding a pregame ritual. The players were amping each other up, but they were doing so in a quiet way.

“Before every game we’d sit in a circle do a couple breathing exercises to calm our nerves,” said senior midfielder Birk Swan. “Mostly the seniors did it, but I still think it brought everyone together.”

Following an exercise that head coach Lane Jaffe had taught them, the group took 10 deep breaths.

“By the end of it, you feel more in control,” said Cole Clinton, a senior faceoff specialist.

When Jaffe took the reins at Palos Verdes this season, he wanted to develop a positive culture and introduce the players to new exercises both physically and mentally.

With the help of assistant coaches Brennen Green and Adam Dahms, he developed functional strength workouts and began to incorporate yoga and breathwork routines. Jaffe has been studying yoga for 25 years and breathwork for two years.

“We wanted to give them different modalities of learning so they were comfortable on the field because they’re all naturally talented athletes,” Jaffe said. “We want to challenge them in different ways so they could be comfortable in the uncomfortable, which is what happens in a championship game.”

Each players’ prior experience with yoga varied. Clinton had done some at previous lacrosse camps, while Swan was trying it for the first time.

Most seniors embraced the practices of yoga and breathwork immediately, with players like Swan integrating it into games as well as life outside of lacrosse. The underclassmen were a tougher sell.

Soon, the whole team was on board, which spoke volumes to Jaffe.

“Once they started asking for the unconventional ways, I realized this group was something special,” he said.

The results showed on the field as well. The team, which was already healthy and brimming with talent as well as college commits, took its game to another level.

The Sea Kings jumped to a 16-game win streak (including club tournaments) and had rocketed to the No. 1 spot in the CIF-Southern Section Division 1 polls.

“We had a lot of chemistry and everyone was on the same page and I think that we were just starting,” Swan, who will play lacrosse at Emerson College in Boston, said. “We had so many kids that were signed to play in college and I felt we had so much opportunity throughout the season.”

However, Palos Verdes played its last game of the season on March 10 — a 19-6 win over Peninsula, Jaffe’s former team. The spring season couldn’t continue due to concerns over COVID-19.

The memories of games and maybe more so, the bus rides, were still vivid as the coaches and players comforted each other over text message after news of the cancelled season broke.

Although the transition to a dashed season was jarring, players like Swan were able to accept the situation with help from the same breathing they did on the sidelines during the season.

“I look at life in a different way than before this season,” Swan said. “I think Coach Lane and all my coaches and teammates changed me this year.

“My new mindset is taking everything one thing at a time … and just doing the best you can with what you’ve got, that’s basically what I’ve taken away from all this. Not taking anything for granted.”