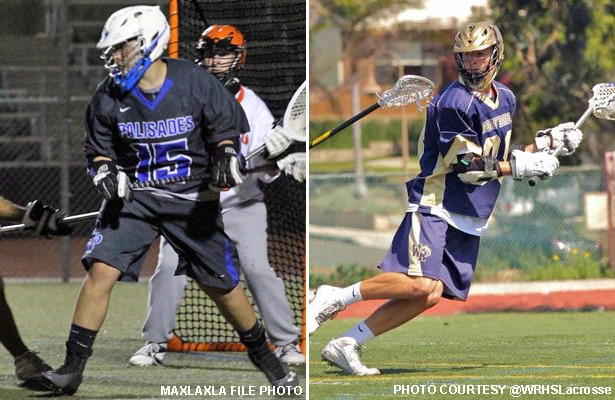 Two league champions and one at-large team won playoff games Monday, all by one-goal margins, to advance to Tuesday’s round of 16 in the US Lacrosse Southern Section L.A. playoffs.

Here’s a quick look at each of the games:

Freshman attack Macchio Rissone scored his sixth goal of the day in the second overtime to lift Palisades into a Tuesday meeting with No. 2 seed Loyola. Rissone has scored 66 goals and recorded 28 assists on the season.

The Dolphins fell behind Culver City (7-11) early, trailing 6-1 at one point in the second quarter, but they rallied to within 6-4 at halftime. But each time Palisades inched close, the Centaurs extended, leading 8-4 and then 10-6 early in the fourth quarter.

But two goals from Rissone and two from Andrew Davidson brought the Dolphins even at 10-10, and Kobi Hancs gave them thir first lead at 11-10 with about 3:30 remaining. Culver City’s Nick Vu scored to make it 11-11 with 1:30 left, and the teams went to overtime. Palisades had a man-up opportunity in the first OT but hit the pipe on their best shot, and the teams went to a second OT period.

The Wildcats were barely in the playoff discussion a few weeks ago — in fact, MaxLaxLA left them out of our “who’s on the bubble” discussion entirely. Now, though, they have won five in a row and were the only at-large team to win its pre-first-round game on Monday.

Sophomore attack Robert Willcox had three goals and six assists for the Wildcats, and sophomore Teo Domic and senior Garrett Clark had two goals and one assist each.

West Ranch jumped out in front of the Trailblazers (13-4) 5-2 after the first quarter, but Sierra Canyon took advantage of some man-up opportunities in the second period to forge an 8-8 tie at halftime. The game stayed close the rest of the way in a physical contest that saw one player ejected and West Ranch serving a three-minute, non-releasable penalty.

Nevertheless, the Wildcats persevered, holding off the Trailblazers over the final two minutes to preserve the win. West Ranch now becomes the No. 16 seed in the tournament and plays at No. 1 Palos Verdes on Tuesday (3:30 p.m.).

Senior middie Nolan Roles scored four of his five goals in the first half as the Eagles took a 9-6 lead over visiting Brentwood (8-7). They stretched it to 13-9 entering the fourth and won comfortably.

But much of the credit for this win goes to the El Segundo faceoff middies, led by freshman Devin Bonney, who helped the Eagles dominate possession. Roles and sophomore Cayman Barber spelled Bonney at the dot. Bonney also contributed a goal and an assist. Defensively, El Segundo forced 14 turnovers.