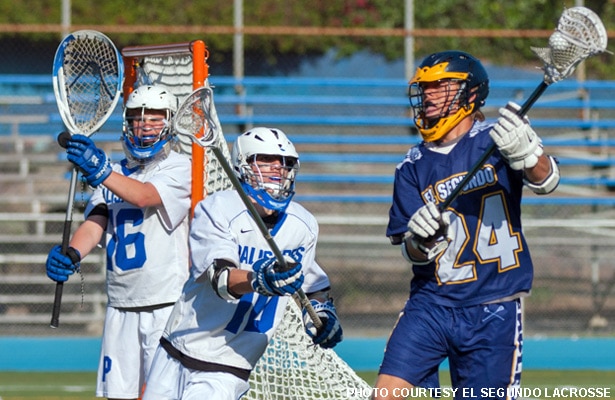 Palisades rallied from an 8-5 deficit after three quarters to force overtime tied 10-10, then beat visiting El Segundo 11-10 in the second extra period to claim the No. 16 seed and advance into the main playoff bracket.

It was the second year in a row the Dolphins won a Monday playoff game at home in double-overtime. Last year, it was a 12-11 win over Culver City.

Palisades had a decided edge in possession, winning 16 of 25 face-offs and collecting 38 ground balls to the Eagles’ 23. But El Segundo goalie Alex Nolan made enough stops to keep the Eagles not only in the game, but even leading at times throughout.

But the Eagles’ high-flying offense never really got off the ground. El Segundo came into the game riding a 10-game winning streak during which it averaged 16 goals per game. But the Palisades defense, anchored by goalie Spencer Au and defender Cooper Lee, kept the Eagles grounded much of the game.

El Segundo led 2-1 after one quarter, and the score was tied 4-4 at halftime. The Eagles began to pull away in the third quarter, opening up an 8-5 lead before Palisades mounted its fourth-quarter comeback. Even with two extra periods, El Segundo couldn’t come close to matching its scoring average.