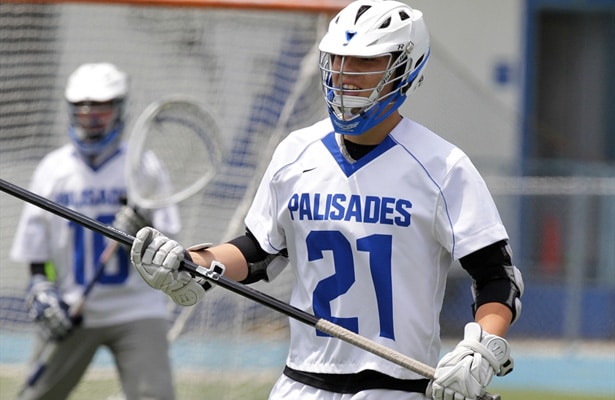 Senior LSM Cooper Lee of Palisades Charter spent the summer touring the East Coast for five weeks, playing in top-level tournaments from Providence to Baltimore. In the end, though, he came back to one of his first-choice schools, announcing this week ha has committed to play lacrosse at NCAA Division-III Colorado College.

“Going into the summer, Colorado College was my top school,” Lee said. “I had gone on non-lacrosse related visits to the school twice before and loved it.”

When he visited in August, he decided he still loved it, despite interest from more than a dozen other D-III programs and a couple of D-Is.

“After finishing my summer circuit, I flew to Colorado on Aug. 4 for a visit,” he said. “The environment was perfect; the dorms and campus were beautiful; and I felt CC was a place were I could find a lot of success. After really connecting well with the coaching staff and seeing the CC facilities, I committed on the spot.”

He said he had received offers or serious interest from the likes of Amherst, Salisbury, Hamilton, Bates, Colby, Vassar, Washington and Lee, Dickinson, Denison, Franklin and Marshal, Ohio Wesleyan, Stevenson and Kenyon, as well as D-I schools Mount St. Mary’s (Maryland) and Binghamton.

A lot of that interest came as a result of his summer tour, which included the Jake Reed Nike Blue Chip and the Under Armor Shootout, both in Baltimore; the Battle Of the Hotbeds at the University of Delaware; the New England Top 150 in Providence, Rhode Island; and the Long Island Lax Fest.

“I pretty much stayed on the East Coast for five straight weeks,” Lee said, “moving up and down the East Coast playing at showcases, camps and tournaments with the Long Island Sting.”

The 6-foot, 195-pound Lee, who also plays for Factory Elite and the LA Heat, credits Palisades coach Bryan “Cutty” Cuthbert for introducing him to lacrosse.

“I began playing lacrosse in seventh grade, when Coach Cuthbert called me out after coaching me in soccer and put a long pole in my hands,” Lee said.

When Lee arrives at Colorado next fall, he will join attack Harrison Raine, a 2015 Viewpoint graduate, on the Tigers’ roster. Last spring, CC listed two Southern California products on its roster: Senior attack Mackie Greason, who played at Cate School, and junior attack Evan Meister of Pacific Palisades, who played at Harvard-Westlake.