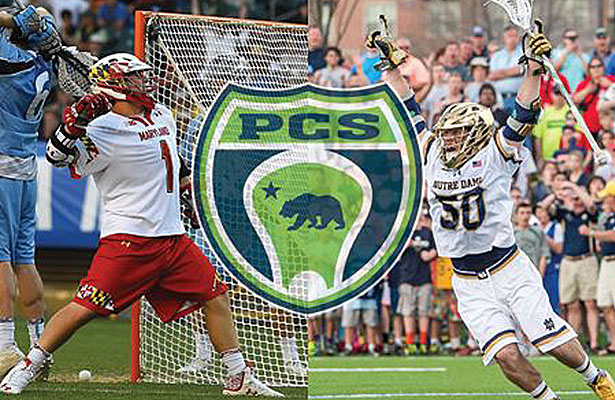 Newport Beach, Calif. – The Maryland Terrapins and the Notre Dame Fighting Irish, two of the participants in the 2015 NCAA Division I Men’s Lacrosse Final Four, will face off on Saturday, March 5, 2016 in the third annual Pacific Coast Shootout at LeBard Stadium on the campus of Orange Coast College.

The Terps finished with a 15-4 record in 2015, including a dramatic 10-8 win over the Tar Heels of North Carolina in the Pacific Coast Shootout. Their season ended with a loss to Denver in the 2015 national championship game.

“Our program had a tremendous experience competing in the Pacific Coast Shootout last year, and we are thrilled to have been invited to participate in the event again in 2016,” said Maryland Coach John Tillman. “Last year, we played in front of an incredible crowd and we look forward to seeing them again in the spring as we take on Notre Dame, one of the nation’s top programs.”

The Fighting Irish, who participated in the inaugural Shootout in 2014, finished their 2015 campaign with a 12-3 record. They ended their season with an 11-10 overtime loss in the NCAA Division I semifinals to eventual champion Denver.

“We are excited for the opportunity to return to Southern California and to play an outstanding Maryland team in the 2016 Pacific Coast Shootout,” said Notre Dame Coach Kevin Corrigan. “This should be a great chance to test our team against one of the best teams in Division I lacrosse.”

“The return of Maryland and Notre Dame to the Shootout is a sign we are on the right track with our mission,” said Executive Director G.W. Mix. “These are two of the top programs in the country, and the fact they both wanted to return to Southern California is a testament to the value they both see in competing and promoting their programs on the West Coast.”