No. 1 Loyola Grinds out Semifinal Win Over Agoura 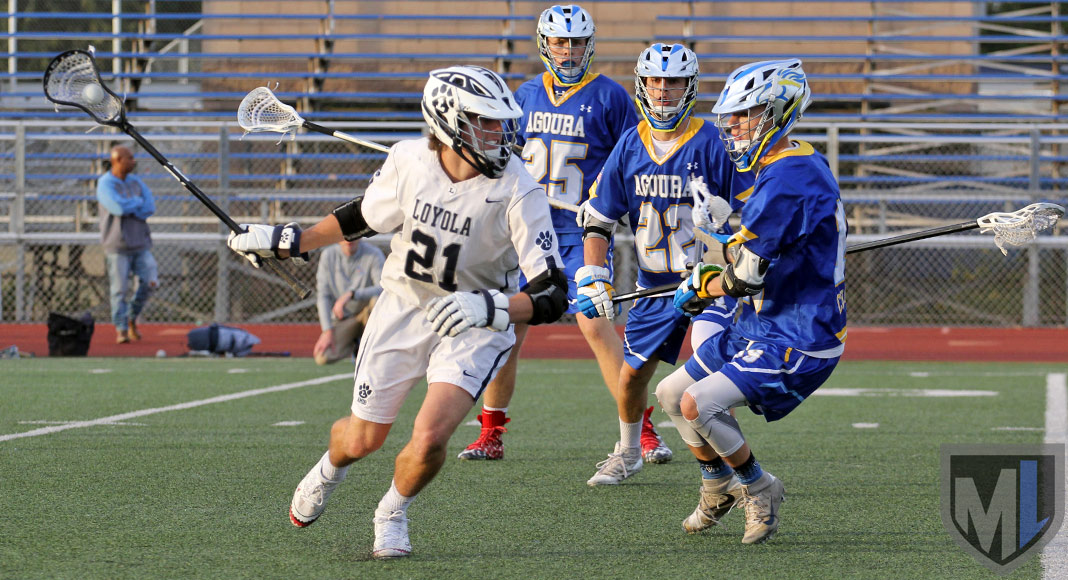 After four consecutive easy victories, No. 1 Loyola was pushed hard in its semifinal matchup with No. 5 Agoura on Saturday, but the Cubs blanked the Chargers in the second half and pulled away for an 8-3 victory.

The win sets up a third consecutive meeting with Palos Verdes in the US Lacrosse LA Boys Championship game Wednesday night at Glendale HS (7 p.m.). The No. 2 Sea Kings (19-3) handled No. 3 Harvard Westlake 8-4 in the first semifinal. Loyola (19-4) has beaten Palos Verdes in each of the last two LA title games and gone on to win back-to-back Southern Section championships.

Loyola had wrapped up its regular season with decisive wins over Crespi and Harvard Westlake in the Mission League tournament, then blasted Santa Monica 16-2 and Westlake 18-3 in the first two rounds of the playoffs.

Saturday started out with the makings of another blowout.

With senior face-off middie Aidan Hesse dominating the dot, Loyola jumped out to a 4-0 lead early in the second quarter. But Agoura scrapped back, eventually pulling within 5-3 a minute before halftime and keeping the score there until deep in the third period.

“They put us through our paces,” Loyola coach Seth Cohen said. “They really stretched us. I think we jumped out to a quick lead on these guys and thought we were going to roll them, and we just let up. In the second quarter they came back and had the momentum going into the third, and then it was kind of a grind-out game.”

Ultimately, the Chargers (15-6) spent way too much time on defense — Hesse won 13 of 14 face-offs — and couldn’t solve the Loyola defense when they did manage to gain an offensive possession.

“I think the only people that thought we could give them a game was us,” Agoura coach Sean Lindsay said. “We knew what we were getting ourselves into in this game; we knew we were going to be playing a lot of defense. It’s a good thing that was the strength of our team.”

Chargers goalie Zach Tripp, playing on a badly sprained ankle sustained in the quarterfinal win over Chaminade that severely limited his mobility, came up with 13 saves, eight of them in the second half.

“When the season started,” Lindsay said, “we wanted to win the Marmonte League and we wanted to get back to the semifinals, which we did. And when we did get back here, we didn’t want the moment to be too big for us. I think we showed up and played hard for four quarters, were physical with them and gave them everything they could handle. It’s tough, though, when you’re playing 90 percent of the game on defense.”

Goals from Speed Fry, Owen Gaffney and Speed Fry again put Loyola ahead after one quarter, and Kaiser Fry scored early in the second.

But Douglas McCarthy got Agoura on the board four minutes into the second period with an inside roll and bounce shot while falling down to make it 4-1. Gage Garrison scored to make it 4-2 with just under five minutes left in the half, but Gaffney answered 30 seconds later to make it 5-2. McCarthy struck again in the half’s final minute, knocking down an outlet pass from Cubs goalie Will Parducci and throwing the loose ball into the net to make it 5-3.

The score stayed that way until the 1:47 mark of the third quarter, when Alex Horowitz took a pass from Kaiser Fry and scored to make it 6-3. The Cubs tacked on two more goals to lead 8-3 with six minutes to play.

“Our offense wasn’t spectacular,” Cohen said. “It was OK, but it needs to be better than that against PV. Hopefully it elevates to that level when we’re playing PV.”