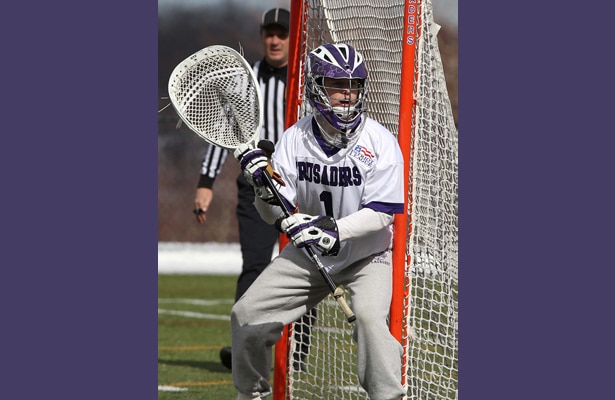 Junior Michael Ortlieb (Corona del Mar High School) made 13 saves for Holy Cross in the Crusaders’ 10-9 victory over Fairfield University.  It was the first time in program history that the Crusaders have beat the Stags, and was the first win of the Judd Lattimore era.

While his former high school teammate was keeping lacrosse balls out of the net in Fairfield Connecticut, Yale junior Michael Keasey (CDM) was down the road in New Haven  putting them in.  Keasey had a hat trick in Yale’s 19-4 win over UMass Lowell.

Chesapeake Bayhawks draftee and First Team All American Erik Adamson (Foothill High School) scored four goals for No. 1 Denver University in their victory over No. 3 Duke.

In what may be the beginning of a long trend, two Orange County alums started for the same team in a NCAA Division 1 game.  Freshman Tucker Guyot (JSerra Catholic High School) and junior Dakota Rohlin (Great Oak High School) started at defense and midfield, respectively for Jacksonville.  Rohlin was credited with two caused turnovers.  The Dolphins had a tough day at the office, losing to Army 20-4.

One week after starting at attack and scoring his first college goal, the versatile freshman  Austin Streeter (San Clemente High School) started at midfield for Bellarmine.  Streeter got off one shot but did not score in the Knights’ win over Robert Morris University.

Freshman Hayden Ruiz (Santa Margarita Catholic High School) got off five shots for Boston University in the Terriers’ 13-9 win over Canisius.  The young Terrier’s are now 2-0.

Freshman Peyton Garrett (San Clemente) saw his first action for High Point University this weekend.  Garrett got off one shot on goal and had one ground ball in the 12-11 road loss to St. Joseph’s.

Freshman Wes Schuler (Santa Margarita Catholic) picked up his first collegiate point for the Manhattan Jaspers with an assist against Princeton.  Schuler’s assist came on a man up situation in the Jasper’s 14-4 loss to Princeton.

What has 2 thumbs and notched his first NCAA D1 point this weekend? This Guy!! http://t.co/lIkzOUyH6a @OCRebelsLax pic.twitter.com/k2b0DWu6pt