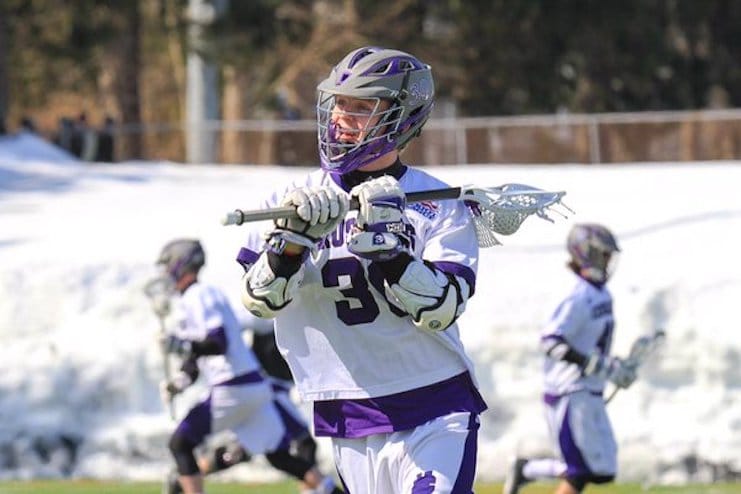 Peyton Garrett (San Clemente ’16) had 1 gb and 1 cto for High Point in a 9-3 win over Georgetown on Tuesday.

Fernando Delgado (St. Margaret’s ’15) started on defense and had three ground balls for Villanova in a 16-11 loss to Yale.

Hayden Ruiz (Santa Margarita ’14) had an assist and a ground ball for Boston University in a 12-5 win over Hartford.

Haydo with a great look to find Jack and it’s 10-4! pic.twitter.com/x0vcDBbUA2

Hugh Crance (Corona del Mar ’15) started at defense and finished the game with a gb and a cto to help Notre Dame defeat Georgetown.

Stone Sims (San Clemente ’14) had a groundball and a caused turnover in Albany’s 11-10 loss to Syracuse.

Eric Rubak (Santa Margarita ’16) won two of the three faceoffs he took and picked up a groundball as Bellarmine dropped their home opener to Michigan 13-5.

Jordan Riggs (San Clemente ’13) had a goal and three groundballs in Southwestern’s 12-9 loss to Rhodes.

Journey Fischbeck (San Juan Hills, ’16) was all over the field for Butler on Saturday with three goals and two assists for a team-high five points. Six of her team-high eight shots were on goal and she also tied for the team lead with two caused turnovers. Butler lost the game to Detroit 20-9.

Riley Eggeman (Capistrano Valley ’14) scored one goal and Caitlin Derry (Los Alamitos ’14) chipped in with an assist to help Denver defeat Louisville (11-10) in triple overtime each added a goal on the afternoon.  Eggeman also recovered a groundball and caused a turnover.