Orange is the New Red at Carthage 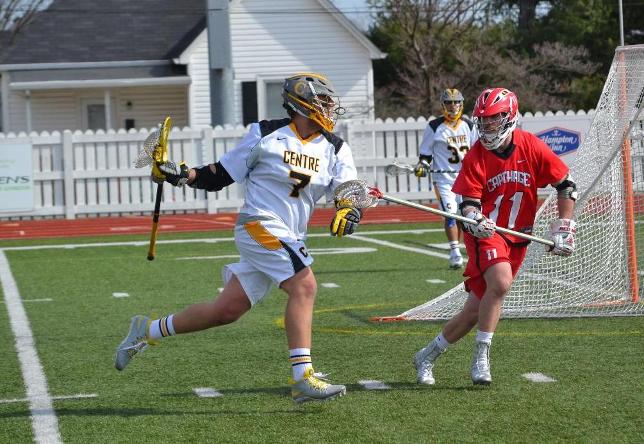 Francis enters his senior season as a returning captain.  He had a stellar 2014 season as he scored a team-leading 72 points (56 goals, 16 assists), along with 33 ground balls and 15 caused turnovers.  He was the 16th-ranked goal scorer in Division III.  The big attackman (6-2, 240 pounds) was named MLC Player of the Week on February 17 and earned 2nd team All-MLC honors at the end of the season.  Francis had this to say about the success he and his OC brethren are finding at Carthage “There are so many factors as to why we are having such success. I believe that first and for most Coach Neff is why we have all exceeded expectations. He is loyal and honest and has been there to push us since day one. He truly cares about us as individuals, as students, and as athletes. He believes that it is his job to make us men as well as turn us into mature individuals equipped with all that is necessary to get out in the real world in our own. I also believe that we have used this opportunity to create something special at a special place. We trust in what we are doing and why we are here. “

Fleming, another returning captain,  has been starting since his sophomore year.  The versatile and athletic senior was the starting goalkeeper in 2013 and  moved to defense in the team’s best interest last season.  He finished the season with 52 groundballs and 33 CTOs.  Coach Neff says that Fleming  “is our Carthage Iron Man which is the team’s top athlete according to test out standards.  He will be in his second year as a captain and very much a coach on the field.”

Ferrell, like Francis, brings impressive size (6-3, 190 pounds) to the attack position. He played in all 21 games and made 20 starts in 2014.  He finished the season as the team’s fourth-leading scorer with 31 goals and 15 assists, along with 16 ground balls.  Only halfway through his career, Ferrell has already climbed to number seven on the school’s all time scoring list with 96 career points.  He has the opportunity to be the fifth player in Carthage history to reach the 200 point threshold. Williams did his part to make sure that Francis, Ferrell, and the rest of the offense got more than their fair share of offensive possessions in 2014.   The speedy LSM led the team with 96 groundballs and 61 caused turnovers. He finished his freshman campaign with  the 11th highest CTO per game rate in Division III .  He also set the school record for CTOs in a game with 10 against Defiance on March 22 and then tied the record with another 10 CTOs against Mount St. Joseph on April 19.  Williams’ efforts earned him MLC Defensive Player of the Year honors. Carthage, a liberal arts college of 2,500 undergraduate students in Kenosha, Wisconsin has become a surprisingly popular destination for not only OC players but lacrosse players throughout California.  Coach Neff reports that 25% of his roster hails from California,.  Only Whittier College can boast a higher percentage of California-bred players on its roster. What attracts so many Californians to Kenosha, Wisconsin? Francis says “Carthage has a beautiful campus that sits on the shore of Lake Michigan. On top of the beautiful scenery it possesses some of the best athletic facilities for a division III school in the country. Lastly I was very intrigued by the small class sizes and attention each student receives.” He adds ” I love how athletes are treated. We are not above the rules but we are respected as student athletes and pushed to excel both in the classroom and on the field.”

Coach Neff is clearly happy that his OC quartet has landed in Kenosha “What I can tell you about all four is that while they have indeed all excelled on the field, they are more importantly all quality young men that have been positive members of our program and the Carthage community. It truly has been a pleasure working with all of them and James and Tim will finish this senior year once again as two of our captains. As I think about the lives they will lead after here, that is where I gain the most pleasure in having been part of their college experience. We also have several young men that have graduated and now are back in the OC area as well.” When asked why Southern Californians have found so much success at Carthage, Coach Neff responded that he thinks “the Midwest is a little easier for a Southern California player to transition to then probably the east coast as far as culture. I think the other big thing is that all of these guys know they can come here and contribute right away too. As far as Carthage specifically, I think our resources and facilities are among the best in D-III and really the guys themselves have formed a community away from home as most of our players are from far away.”