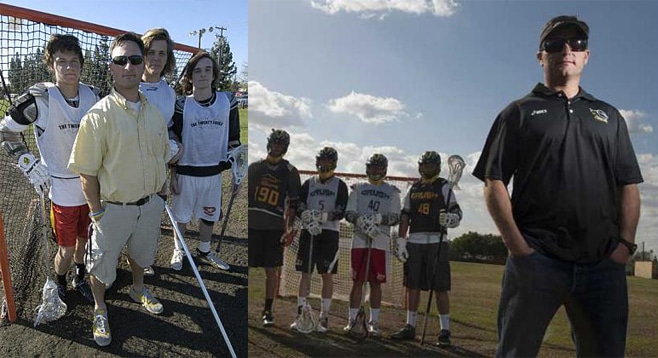 Foothill boys head lacrosse coach Jon Fox celebrated his 23rd year around the sport of lacrosse in Orange County in 2014 with his sixth Southern Section Championship. As his career in Orange County is taking on legendary status, it’s important to note that like most other kids in the area, his love of the game started with a simple introduction to a stick when he was a kid.

Up until 1991, Fox’s involvement with lacrosse was a single stick brought back from a friend’s house on the East Coast during his high school years. The seed was then planted and when he enrolled in college at UC Irvine, Coach Ray Ralph helped grow the roots that would take hold and never let go.

In just four short years, Fox helped lead UCI to a WCLL Division 2 championship and was named MVP of the championship game.

Before Fox was a champion, he began coaching in 1992 at Uni High school as the assistant coach to their club team. As a testament to the spirit of OC camaraderie, he began coaching simply because some other players on the team were coaching at the other local school with lacrosse, Irvine HS.

At the time, Fox’s drive to coach was new and exciting and a labor of love. “[The Orange County Lacrosse Association] was started by lax legend Mitch Fenton and Will McMinn around 1986 or ’87 and it had probably four middle school teams and five high school teams at the time I came around,” said Fox. “OC legends like Keith Carroll were wearing spandex shorts to look like the NLL players, and had future stars Woody Josselyn, Adam Miner, Pat Gowan, Greg Guy and others that were playing in the league.”

Fox has seemingly been through it all; when he began coaching, fields were being lined with chalk and the league owned all the gear down to equipment and jerseys. Fox recalls that one of most important developments occurred when the youth season moved to the Winter, eliminating conflicts with virtually every other youth sport and the numbers really started growing. “[Growing the league] took incredible leadership and dedication from OCLAX board commissioners and each of the presidents also really helped push the sport. People such as Bill Godsey, Pete Pallad, Rita Guareillo, Robbie Murakami, Jim Crotwell, Rodger Brent, Woody Josselyn, Lambert Foreman, Mike Ellison, Lonny Blank, Hank Nunez, Yvette Cervantes, Dan Perry, and many others before them.”

When Fox first started coaching, the players consisted of a lot of alternative athletes: skaters, surfers, BMXers, and a lot of guys that really excelled in the mosh pit at concerts, possible future X games athletes, many of whom probably weren’t eligible for CIF sports. As the sport became more serious at the top, the typical athlete quickly shifted to more traditional athletes as they discovered that the sport was being taken more seriously. Then in 2006 lacrosse was included as a CIF sport, which Fox said helped catapult the sport throughout the state. “CIF recognition in 2006 was huge,” Fox said.

It is clear that not all of the changes have been positive, nor have they been confined to lacrosse. The truth is that Orange County is replete with organizations that have forgone their mission statements in exchange for quarterly statements. “Other changes from culture affects all sports,” he said. “It seems like now almost all youth sports are businesses not just lacrosse organizations. Even the “all volunteer” program in other sports like AYSO are victims of this.”

Luckily, there are plenty of constants that define the county the same as they once did. “The kids and families in Orange County are still fun to work with,” said Fox. “They love sports and are very dedicated their kids…The game has its own unique energy and tradition that keeps coming through.”

Fox believes the game in the OC is headed in a positive direction. “[The game] is just advancing in every area. OC is doing a good job with the game overall. Kids are starting to accomplish their goals of making the top NCAA teams, and we are seeing many more playing in MCLA and loving the game and competing at high level as true student athletes.”

Fox feels there is always room for improvement even though things seem to be going well, “We still need more opportunities for rec play, keep the game for the kids, develop more girls opportunities. But overall good stuff happening.”

And if he could change one thing about the game in Orange County, what would it be?

“Bring back the high school Senior All Stars versus the Coaches game!,” said Fox. “Well, actually maybe i’m to old for that now…. and we don’t want to risk our undefeated coaches record. Secondly make all youth parents and coaches take a sportsmanship class and a refereeing class. Finally, its really important that the kids coming up are playing the game to have fun and understand that how you approach the game and playing it, and how you treat others is much more important than winning a game.”

Fox threw out one additional note.

“PS, a shout out to the last USLAX OCLA youth U-15 festival team to UMass in 2005 with myself, coach Meyran, coach Miner and CJ Jacobs on middie!”

Previous articleLast Week by the Numbers
Next articleBoyer Selected to 2016 3d All-Star Squad in Denver
MaxLaxAll Lacrosse. All the Time.
Southern Section Boys