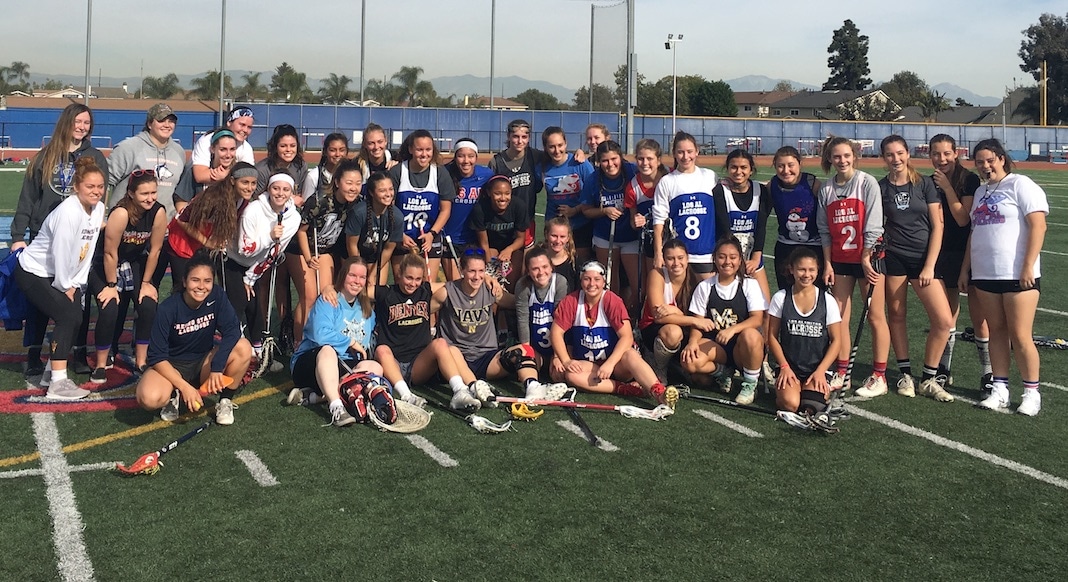 Tradition reigned at Los Alamitos High School on Friday when Griffins past rubbed shoulders with Griffins present at the annual alumni game.  The Griffins dominated the local girls’ lacrosse scene from 2009-2014, winning six consecutive County and Southern Section championships from 2009 to 2014, making the event a short course in Orange County girls’ lacrosse history.

Those alumni and more returned to their old stomping grounds on Friday and didn’t hold back against the youngsters. The Griffin alumni beat the current Griffins, unofficially winning 9-1.

The game was played with two 20 minute halves with a running clock. Stats were not taken and the game was reffed by Los Alamitos’ JV players.

Despite the score, Aragon liked what she saw in her team. After the game, Aragon and the current Griffins sat down to talk about what went well and what they needed to improve on.

“I saw things I liked. I saw communication I liked and I saw some younger girls stepping up,” Aragon said, adding that the current Griffins had confidence and were staying loose.

Aragon, in her second year, looks to get Los Alamitos back to the dominant program it once was. While the competition is tougher since Aragon left as a player, Aragon is determined to put Los Alamitos back on the girls lacrosse map again.

“I want these girls to have fun and I want them to learn, but I want to make Los Al a name again. I feel like we kind of just fell off,” Aragon said.

One thing was certain, the current Griffins had fun facing the alumni.