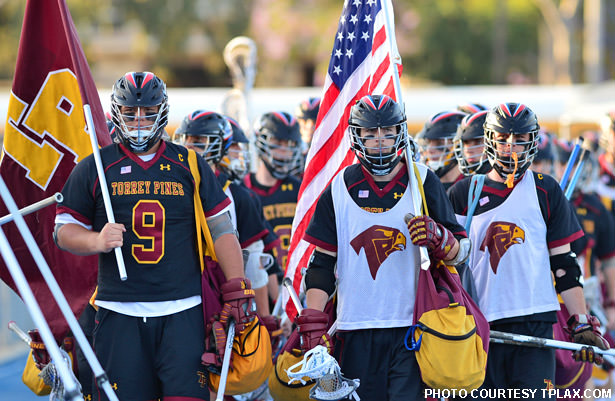 The Torrey Pines Falcons finished the regular season 12-7 overall and 7-1 in the Avocado League. That earned them a berth in the CIF San Diego Section Open Division tournament, but only as the No. 8 seed in the eight-team bracket.

No matter. The Falcons knocked off top-seeded Pacific Ridge 14-13 then eliminated Cathedral Catholic 9-8 in overtime to reach the title game opposite No. 2-seed Poway, a team Torrey Pines had beaten 9-5 to close out the regular season. This time, though, Poway claimed an 8-7 victory and the CIF championship.

With a roster loaded with returning players, Torrey Pines is looking forward to reaching that final game again and coming out on top. Coach Jono Zissi recently took time out to answer a few questions about his squad as we look ahead to next spring in our offseason check-in series:

What is the current state of your program? How does it look relative to previous years? Have you improved; are you rebuilding?

We are excited at the state of this year’s team. Every year I say our team will only be as strong as our senior class. This season we are lead by 16 young men who are already embracing their roles and moving us forward on and off the field.

What is your team’s central philosophy?

Our creedo has been the same since the day I took over six years ago. The character of our boys, the culture of our program and investing in community service are our three areas of focus year after year. The lacrosse part takes care of itself.

Who are some of your key returners at each position? Who are you going to rely heavily on? Any recent commitments?

Are there any newcomers fans should look out for? Will any freshman make a significant impact?

We have some promising young players; we are hopeful some will rise up and be contributors.

What are some goals you have for the season? Championship, or building talent?

We hope to improve upon last season and win our last game.

Do you foresee any major challenges along the way? What do you think will be a major hurdle for your team?

Challenges are inevitable, and we are excited to attack them.

Who do you think will be some of the other top teams in the county? Who are you scared of?

LCC, Coronado, Cathedral, Bishop’s, Poway … We have a lot of respect for all of those teams and coaches.