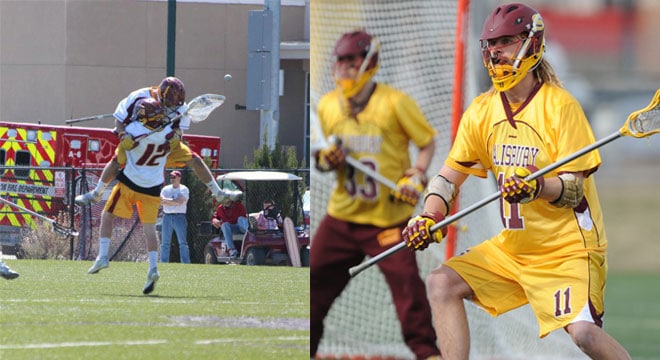 Inside Lacrosse magazine recently released its preseason All-American teams as part of their Face-Off Yearbook and two Orange County natives were honored.

Salisbury University’s Knute Kraus (Tesoro High School) and Colorado Mesa’s Brad Brandenburg (Los Alamitos High School) were named pre-season Honorable Mention All-Americans. Brandenburg and Kraus are looking to lead both of their teams to a championship this year and believe their teams are capable of winning it all.

Division II Colorado Mesa finished 7-6 last year and was 4-2 in conference. Brandenburg was outstanding all year and was named Western Intercollegiate Lacrosse Association Co-Defensive Player of the Year with Dominican University’s Sean Donohue for his 2013 campaign. The Mavericks will have strong senior leadership returning this season and are poised to make a push into this year’s playoffs.

Brandenburg is bullish on the 2014 outlook for the Mavericks. “We have loads of talent and I can’t wait to see if we can put it all together to play some high level lax,” the former Griffin said. “Our primary goal is to win our conference [WILA] outright for the first time. Secondary to that is to win every game on our schedule and put pressure on the selection committee to give our squad one of the southern playoff bids. We have 16 goals and they are the 16 games on our schedule. Hopefully all 16 are accomplished and maybe we’ll have a shot to create some more.”

Kraus, a junior defenseman for the Division III Salisbury Gulls, leads a defense that is perennially one of the stingiest in the country. Krause ranked sixth on the team last season with 18 caused turnovers and eighth with 40 ground balls. He joins four other Gulls on Inside Lacrosse‘s preseason All-American Team. The Gulls are ranked #4 in the Inside Lacrosse pre-season poll.

Feast your eyes on this ridiculous goal at last summer’s Tribz Lacrosse Showcase in Irvine by Kraus.