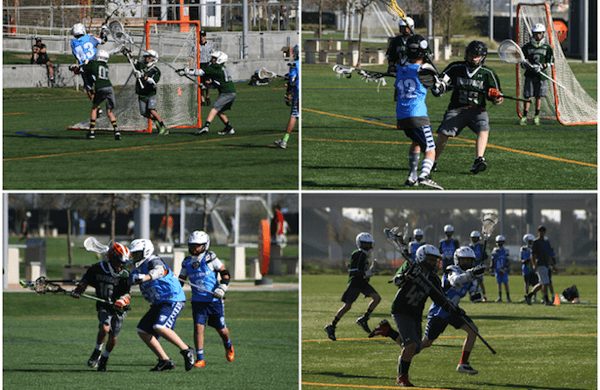 For the third week in a row, the Wolfpack celebrated a close win over a formidable opponent. Saturday’s rematch against the OC Surf Dawgs at the Orange County Great Park ended with a 5-3 victory for the Wolfpack.  The Wolfpack showed awesome teamwork and a warrior spirit as they fought strong and tough in both offense and defense.  Both teams had ample possession of the ball, which made for an exciting game, but the ‘Pack’s  defense once again made it difficult for their opponent to score, while the offense did their part at the other end of the field

The offense pulled through with the win led by Luke on attack who scored 4 of his team’s 5 goals.    As the season progresses and the team gains more confidence, the Wolfpack defense has become more aggressive by pushing the ball in transition and helping out on the offensive end of the field. Saturday’s game was not decided until the final seconds when defenseman Kyle “Scooty” forced a turnover near the crease, and led a fast break up the middle that ended in the final goal of the game.  Great game and great win Wolfpack!

Photo credits:  Sheri G.(Bottom right photo in the quad:  Kyle during his fast-break at game’s end)

U13 Boys: SoCal Black 6, OC Rebels Jedi 3
The OC Rebels Jedi lost 6-3 to a good So Cal Black team.  Rebels rebounded from tough first half and played hard making a good game of it after being down a bunch early in this one.
U15 Boys: Cavaliers Edge A OC Rebels Jedi Masters Again
In a closely contested rematch of last weeks overtime game battle,For the second week in a row, the OC Rebels Jedi Masters came up just short again.  This time losing to the gritty Corona Cavaliers Blue 9-7.  In Once again the  game was close throughout as the two teams went toe to toe.  Scoring for the Rebels were  Sean Ibarra, Jake Landry, and Connor Kentros with two apiece and Carson Poremba with one goal. Reed Gover showed some great speed on defense for the Rebels with several  breakaway runs down the field, but the Cavaliers got the last word again
U15 Boys: OC Rebels Wookies Take Down Corona
The OC Rebels Wookies had an outstanding game this weekend winning 6-1 against Corona Cavaliers Orange. The Rebels had it going on both ends of the field.  Great work in the cage by OC Rebels goalie Zackary Silber, and a prolific offense on the other end of the field that peppered the Corona defense with numerous shots were the keys to the victory.  Christian Libutti lead the way with a hat trick.   Aggressive on D, busy on offense proved to be the right combination for the Wookies today. Head Coach Jordan Terrio said it was another solid team win and especially nice today because it was his birthday. Happy Birthday Coach Jordan!