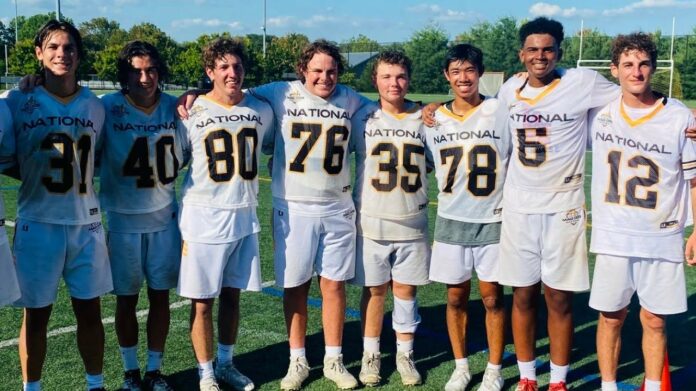 The Naptown National Challenge brings elite, nationally recognized, club teams from across the country to Annapolis, Md., to compete in a three-day event comprising two tournament days at several field locations in the Annapolis area, culminating with a championship event at Navy-Marine Corps Memorial Stadium televised on ESPNU. Here the nation’s top lacrosse teams compete against the best of the best, and the level of competition draws the attention of hundreds of college coaches, making the Naptown National Challenge the summer destination for the country’s strongest competitors.

With PLL Whipsnakes head coach and two-time PLL Champion Jim Stagnitta at the helm, the group started their Naptown experience facing the #5-ranked team in the nation, Prime Time, from the New England area. Ip found a burst of energy at the end by scoring three of the team’s four goals; but it wasn’t enough to close the 4-12 gap. Next up was #7-ranked MadLax from the surrounding area, and the boys surprised their east coast opponent by squeaking out an OT win with a golden-goal snipe by Ty Caffarelli assisted by the FOGO, North Carolina-native Coleman Kraske (Ohio State).

Seeded 11th after Day 1 pool play, these west coast kids and the entire Mad Dog team were poised for battle. They began Day 2 defeating Amped Lacrosse from Virginia 7-3, then advanced in the bracket over True Ohio 9-7. Although the heat and humidity proved brutal Sunday, the boys weren’t finished.

Then they would have to face Prime Time again in the quarterfinals. While the first quarter’s score might have had some predicting the game would have the same results, Mad Dog found their groove, and the dynamic duo from CdM, Ip and Caffarelli, popped off three goals a piece, along with fantastic offensive support from Anderson and Todd, and a great last-minute save by Trikas to clinch the 8-7 victory and send their stunned opponents home.

While this is not the boys’ first trip to Naptown, it is their first to the “Final Four.” And after battling against teams from across the Eastern Seaboard, they have definitely proven that the West can not only keep up, but can outplay some of their East Coast counterparts. The crew will face reigning champs Annapolis Hawks on Wednesday morning, June 30. The winner will be center stage in the championship game in Navy-Marine Corps Stadium, live-broadcasted on ESPNU at noon Eastern time.