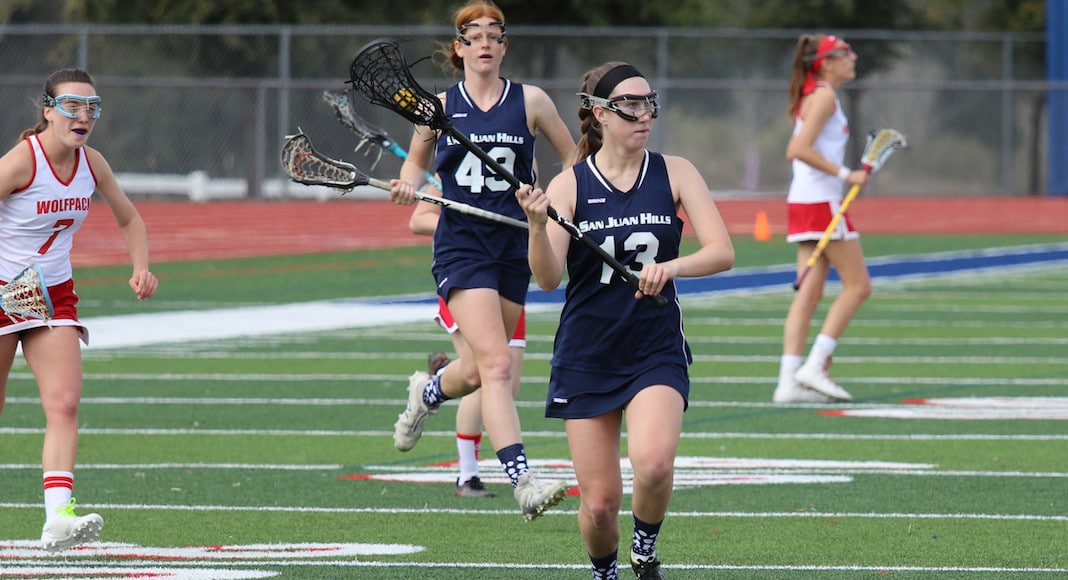 San Juan Hills will say goodbye this season the senior class that helped define the program.  Prior to their arrival as freshmen in 2015,  San Juan Hills had only one win in the program’s history.  Since then the Stallions have won 34 games and reached the playoffs twice.

Having built all this momentum there is nothing that the seniors would like more than to give the program a couple more firsts before graduation – a league championship and a playoff win.

Although the class of 2018 played a significant role in those 34 wins they did not do it alone, and graduation losses leave the Stallions with some rebuilding to do at some positions.

Senior captains Taylor Austin, Bridget, and Claire Welter are all midfielders, and that will be the Stallions’ strength.  Joining those three to create an impressive offensive unit are  Mandy Muhr, Jacy Fischbeck, and Lucy Hodge.  That group combined for over 130 goals last season.

The defense on the other hand, although talented, is young and unproven.

“I’m going to say we’ll be on the inexperienced side, especially on defense,” said coach Michael Welter, “where everyone is new except senior defender Olivia Fu. However we have veterans at the middie positions and they need to learn how to take over a game, which will be new for them.”

Although the defense is rebuilding Welter thinks they have the right stuff to surprise some people.

“Defense & goalie will be our biggest potential areas for growth,” Welter said. “With practically everyone new, they need to learn how to communicate & trust each other. The will and desire are there – we just need the execution to happen. They’re smart kids… they’ll figure it out.”

In addition to bringing a young defense up to speed, the Stallions face another big challenge – their schedule.   The Stallions will be facing playoff-quality teams throughout the season, including three of last year’s semi-finalists (Mater Dei, Foothill, and Newport Harbor) in their first five games.  The fourth semi-finalist, St. Margaret’s, comes later in the season.  All told the Stallions will play 10 games against 2017 playoff teams.

If the offense clicks like it did last season and the senior middies can take over some games, particularly in the early part of the season, this will give the defense a little extra time to mature.  And that could be enough to put the team goals of an SCL crown and some playoff wins in reach.