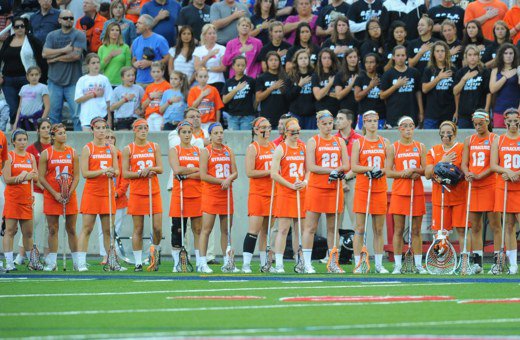 Three graduates of Orange County girls’ high school programs are making names for themselves in college, and were mentioned in the most recent edition of US Lacrosse Magazine.

Emily Kift (Foothill High School 2013) is a freshman goalie for the #2 ranked Maryland Terrapins. Although only a freshman, Emily is making a run at the starting position. Talking about the internal competetion between Kift and redshirt junior Abbey Clipp, head coach Cathy Reese said “They’re totally different players. Emily is super active. She’ll come out of the cage. Abbey is a traditional goalie. Emily will take her chances. Abbey has more experience. They could split time or one could step up.” Reese also talked about her goalie controversy with local radio station WOKV: “We were at this same point last year between Kasey and Abbey. I just didn’t know. This year again, they’re both doing a really good job but they’re very different style goalies. I think as we start the season we’re going to see both of them play and playing a fair bit whether we’re splitting halves or taking each game as it comes. We’ll see how the season plays out from there.”

Adrienne Anderson, (Santa Margarita Catholic High School 2012) is a sophomore at #14 Stanford University. The speedy midfielder appeared in 20 games for the Cardinal last year while notching 10 goals and 4 assists. She is listed as a projected starter in 2014!

Jacky Craycraft (El Toro High School) is a senior midfielder for the University of Redlands Bulldogs. The Bulldogs are the two-time Southern California Intercollegiate Athletic Conference Champions. Lacrosse Magazine notes that the west coast gets more competetive every year and sees the Bulldogs as a sleeper team who could surprise some people in the NCAA tournament this year. Jacky’s 88 goals (not a typo!) earned her third team All-American honors in 2013. She was also the SCIAC Player of the Year.