Oaks Christian Holds Off No. 4 Westlake for 14-13 Upset 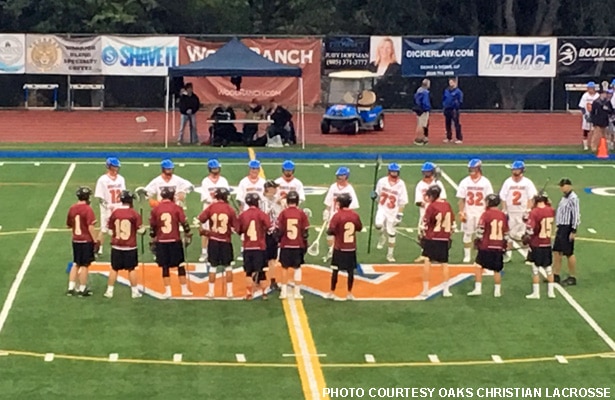 Visiting Oaks Christian jumped out to a 2-0 lead Friday, increased it to 5-1 after the first quarter and didn’t back down in the face of a relentless Westlake attack, beating the No. 4 Warriors 14-13 — the first time the Lions have beaten Westlake in 11 meetings dating back to 2005.

It is a signature win for the program in coach Jeremy Sieverts‘ first season. The No. 13 Lions (4-4, 3-1) have hovered around .500 for the last few seasons, beating weaker teams but rarely able to to get over the hump against the power programs. With a young offense and a veteran defense, though, this Oaks Christian squad might be different.

Friday, Cort Rogers scored two minutes into the game to give the Lions a lead they would relinquish only briefly in the third period. Evan Phillips, Danny Redell, Rogers again and Redell again made it 5-1 after the first quarter.

Westlake (7-2, 3-1) was without starting goalie Matt Kilkeary, and backup Ben Oken took a bit of time to settle in. He made only two saves in the first quarter but stopped five in the second, as the Warriors pulled within 9-7. Oken finished with 12 saves.

The Warriors continued their comeback in the third quarter, with senior Brett Reilly scoring two of his five goals and Spencer Tyoran giving the Warriors an 11-10 lead with 3:03 to play in the period. But Lorenzo Santor scored on a pass from Rogers to tie it, and Seamus O’Brien put Oaks back in front 12-11 with 40 seconds left.

Philip Bliss scored quickly in the fourth period to again pull Westlake even, but Phillips restored the Lions’ lead with 8:59 to play, and Redell scored his fifth with 3:28 left for a 14-12 lead.

Westlake got one more at the 2:04 mark, then peppered the Oaks Christian goal on a man-up opportunity in the final minute, but Lions’ goalie James Vils, who finished with nine saves, was up to the task.

Westlake was led by Reilly (5g, 1a) and Jacob Mannisto (3g, 1a), with Tyoran, Duke Cohen, Nick Reilly, Bliss and Grant Barclay all finding the net, as well.

Friday was the Warriors’ second one-goal loss at home this season, and they hold one-goal wins over Palos Verdes and at Agoura (in overtime), and a two-goal win at Newbury Park. But they still face Agoura, Newbury and Oaks once more each in league. For a team that has been in the Top 5 since the preseason and has received some mention as a potential L.A. champion, Westlake is cutting things pretty close.