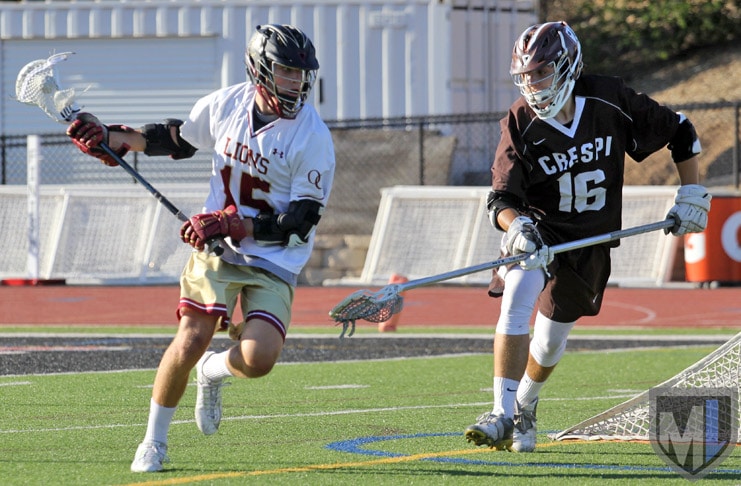 After a bit of a rocky first half Tuesday, sixth-seeded Oaks Christian righted itself and pulled away from No. 11 Crespi for an 11-7 victory in the first round of the US Lacrosse Southern Section North playoffs. The Lions (15-4) advanced to Thursday’s second round and will travel to face No. 3-seed Harvard Westlake, a 13-2 winner over Santa Monica.

Early on, though, Crespi was poised to pull off an upset on the road. The Celts scored the first two goals of the game and led 3-2 after one quarter and 5-4 at halftime.

“We were down a goal at halftime, but I try to make it a habit of not looking at the scoreboard in the first half,” Lions coach Jeremy Sieverts said. “I thought we just could play a lot better, and I know that our guys thought so, as well.”

In the opening minutes of the second half, they did just that, winning the first two face-offs and converting both possessions into goals. Danny Redell scored the first, assisted by Lorenzo Santor, and Cort Rogers got the second unassisted to give the Lions their first lead of the game.

“I think we were a little out of sorts in terms of what we were trying to do and what we planned to execute,” Sieverts said. “[At halftime, it was] just encouraging them to do the things that we do. It’s nothing too complicated. It’s just getting back to doing things that we recognize as good lacrosse — dodging hard, making the right pass and running our stuff. We kind of got away from ourselves there.”

Oaks carried a 6-5 lead into the fourth quarter and extended that to 8-5 at the 8:21 mark on goals from Mike Spaeth and Santor. Crespi cut the margin to two with 7:19 to play on an inside finish by Rafa Francisco, but Rogers quickly answered in transition, making it 9-6 with 6:29 left.

The Celts again pulled within two when Francisco found Robert Clapper in the crease and Clapper bounced it past Oaks goalie James Vils, but Rogers answered once again, restoring the three-goal lead with 2:39 to play.

“Give Crespi a lot of credit,” Sieverts said. “Those guys battled. They rose to the occasion in the playoffs. They fought hard and made it tough for us, but our guys stepped up and started to execute the things we asked them to execute, and over time it will start to go our way if we do that.”

The Celts had come out strong in the first quarter, getting unassisted goals from brothers Ryan Milkovich twice and Jake Milkovich and led 3-1 as the quarter wound down. Redell pushed a goal across with 12 seconds left, though, keeping the Lions close.