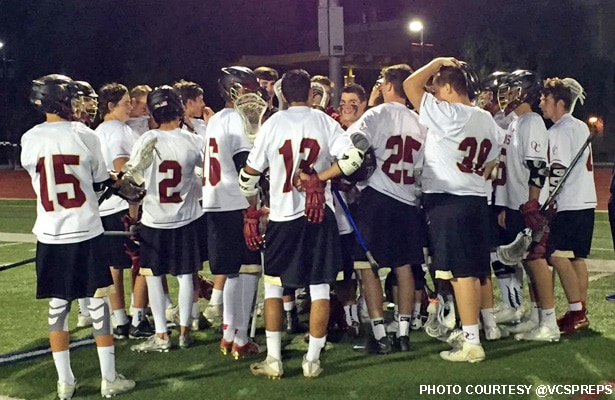 Sophomore attack Seamus O’Brien scored four goals Tuesday and junior middie Danny Redell scored three as No. 7 seed Oaks Christian pulled away from No. 10 Thacher in the second half to win 12-7 — the school’s first playoff victory and first 10-win season, both under first-year coach Jeremy Sieverts.

Tuesday, O’Brien and Redell put Oaks up 2-0 in the early going. After the Toads had tied it 3-3 in the second quarter, O’Brien and middie Nate Lenthall scored to restore a two-goal cushion for the Lions. The score was 5-4 at halftime.

Thacher stayed within reach throughout the third quarter, trailing only 7-5 entering the fourth, but the Lions stretched their lead to 9-5 in the first few minutes of the period and closed it out.

Sophomore attack Cort Rogers had a goal and five assists for Oaks, and senior middie Evan Phillips had a goal and one assist. Freshman middie Carson Campbell scored one for the Lions.

Information provided by Oaks Christian Lacrosse and via @VCSPreps on Twitter.