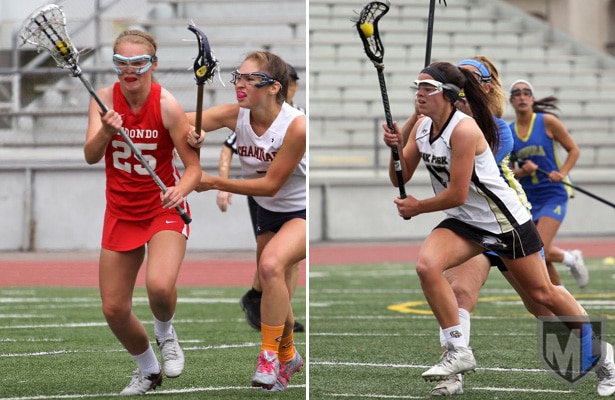 The seniors on the Oak Park girls lacrosse team have been here before — three times before — but they are hoping this time the ending is different.

Wednesday, the top-seeded Eagles (15-3) will play No. 3 Redondo Union (15-2) for the US Lacrosse LA championship (5 p.m., Mira Costa HS), the team’s fourth consecutive season reaching the championship game. But Oak Park has lost in each previous trip, falling to Agoura in 2013 and 2014 and to Redondo last year. So yes, the Sea Hawks have been here before, too.

Last year, the teams engaged in a back-and-forth affair that Redondo won 13-12 on a goal with 22 seconds left and a save in the final seconds to prevent overtime.

But this is a very different Redondo team, and coach Tom Borgia said one of his biggest tasks this season was convincing his players they could be just as good and go just as far as last year’s group, even after losing their two best players (one to graduation, one to transfer).

Since opening with losses to semifinalists Oak Park and Agoura, the Sea Hawks have won 15 in a row, including Saturday’s 9-7 win over No. 2 Chaminade.

Redondo is led offensively by seniors Hailey Vorndran (71g, 8a) and Julia Brand (29g, 30a) and sophomore Alison Shafer (32g, 23a). Defensively, senior Allie Vorndran anchors the back in front of junior goalie Melanie Paz.

For Oak Park it is all about the seniors: Army committed Morgan Shorts (49g, 13a) and Indiana soccer commit Julia Gilliam (32g, 25a) lead the offense, but the Eagles will be without third-leading scorer Ania Brown (40g, 16a) on Wednesday after she received two yellow cards in Saturday’s win over Agoura. [UPDATE: The Ventura County Star reported late Tuesday that Brown has, in fact, been ruled eligible and will play Wednesday.] But senior Shayne Costello (23g, 17a) junior Cam Bear (9g, 9a) and senior Lauren Duerfeldt (10g, 7a) have been solid complementary scorers all season.

The winner of Wednesday’s LA title game will play the Orange County champion — Mater Dei (19-0) or Foothill (13-8) — in the US Lacrosse Southern Section championship game Saturday at Valencia HS in Placentia (11 a.m.).