No. 8 Oak Park Rallies to Beat No. 4 Chaminade 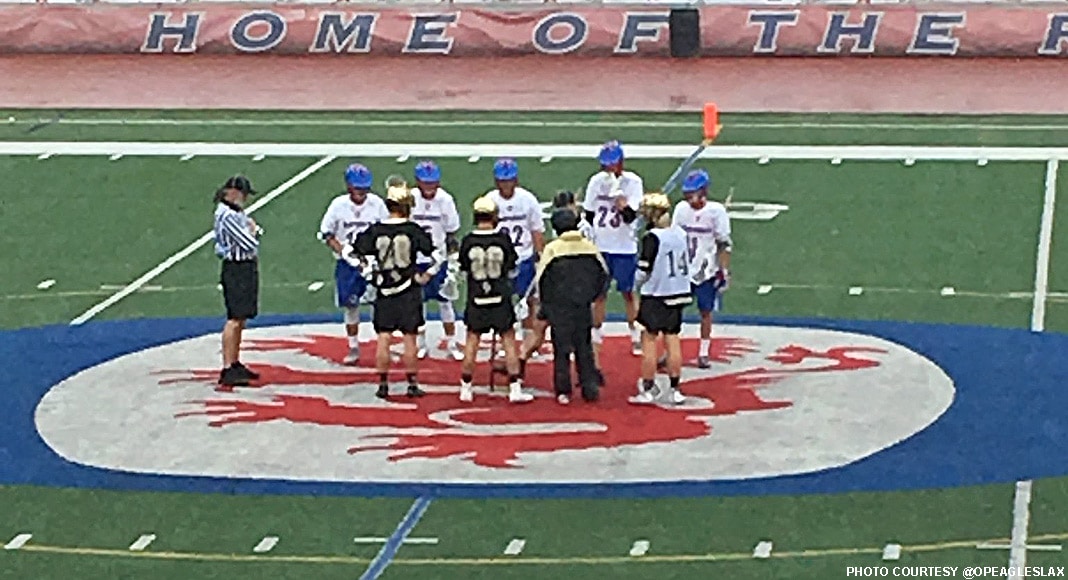 Visiting Oak Park scored three goals in the fourth quarter Tuesday, the last coming with only 1:07 to play, in an 8-7 comeback win over No. 4 and previously undefeated Chaminade.

“So proud of my Oak Park Eagles laxmen,” coach Tarik Ergin tweeted after the game. “They answered the call today and defeated a talented and previously unbeaten Chaminade Eagles team.”

No. 8 Oak Park (3-3) lost Saturday at San Marcos with a lineup limited by injuries and conflicts with the SAT test, reasserted its status with a solid victory over a Chaminade team that was coming off a big win Friday night at Oaks Christian.

“We honestly played about as bad as we can possibly play today,” Chaminade coach Steve Lane said via text message. “It was like a twilight zone.”

Oak Park ultimately took its only lead with a little more than a minute to play when Tyler Bradbury found Marcus Jasso for the game-winning goal.

Chaminade (4-1) spent much of the game playing man-down defense, with the Oak Park twitter feed citing six extra-man opportunities for the visitors, two of which they cashed in with goals from senior middie Bryce Hardy.

The second of those man-up goals pulled Oak Park within 7-6 with 10 minutes left in the game, and Jasso later tied it at the 7:27 mark and put the Eagles ahead with a minute left.

Hardy led Oak Park with three goals, Jasso and freshman Sam Peters each had two and Bradbury scored one.

Chaminade, which had beaten Agoura, Thousand Oaks and Oaks Christian in consecutive games and moved up from a No. 9 preseason ranking to No. 4, was held scoreless after pulling ahead 7-5 in the closing seconds of the third period.

“We felt like we had something to prove in the beginning of the season, and we were on a mission to do so,” Lane said via text. “And we did. We have never been in the Top 5 before, and now that we are there, we need to learn what it means to stay there. I still know we should be a Top 5 team, but we have to show up like one every day, not just when it’s convenient.

“If we drop in the standings, that would be one of the best things for us. This was an important learning experience for us.”