No. 8 Oak Park Holds Off Oaks Christian in Upset 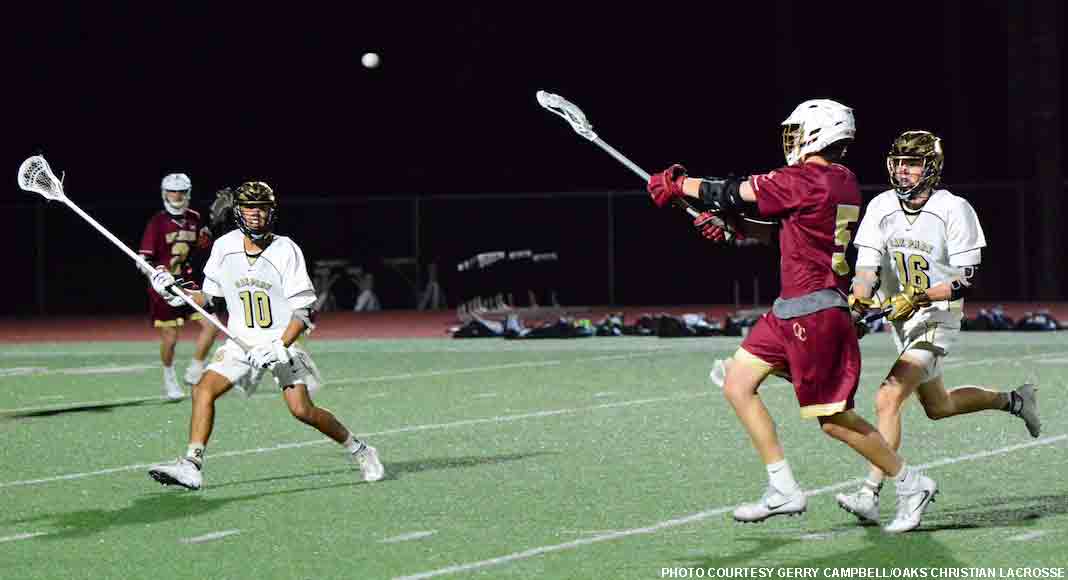 The Oak Park defense limited No. 6 Oaks Christian to two goals through the first three quarters Wednesday, then held off a late Lions rally to win 8-6, the Eagles’ second consecutive victory over a Top-10 team.

It was the third win in a row overall for the Eagles (6-4) and third overall over a Top 10 team. Oak Park previously beat Chaminade, now No. 4, and Monday it beat No. 9 Crespi.

Wednesday, senior middie Bryce Hardy led the charge on offense, with senior goalie Connor Kaminsky holding things down in the back end. Hardy scored three of his game-high five goals in the first quarter, staking the Eagles to a 3-0 lead in the game’s first 10 minutes. Meanwhile, Kaminsky anchored the defense with 13 saves, allowing only two second-quarter goals while OP built a 7-2 lead heading to the final period.

Oaks Christian mounted a rally, though, scoring three goals in a four-minute span early in the fourth to pull within 8-5 with just under six minutes remaining. The Lions made it a two-goal game with 3:47 left, but the Eagles managed to hang on for the win.

Hardy’s five goals led Oak Park, and Tyler Bradbury scored the team’s other three and also had an assist.

It was the third loss against a Top-10 opponent for the Lions (7-3), who previously lost to Chaminade and No. 1 Loyola. Oaks Christian also has Top-10 victories over No. 2 Palos Verdes and No. 7 Agoura in triple overtime.