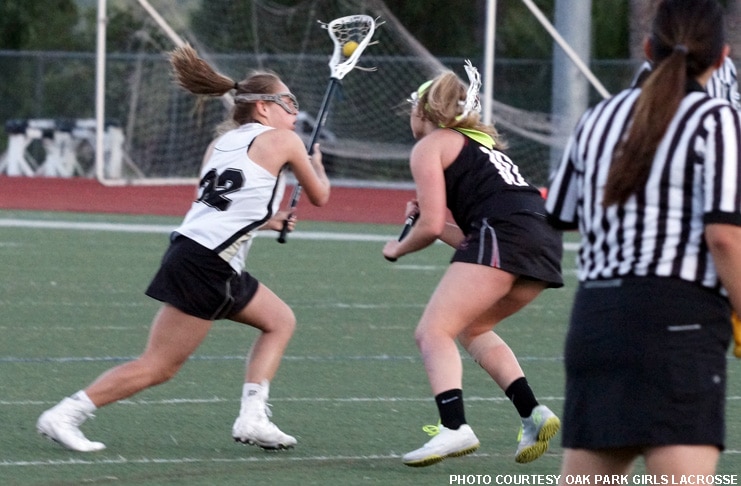 The second-ranked Oak Park Eagles continue to improve game by game. With their latest victory Wednesday, this young but reloaded team moves to 6-2 on the year with both losses by one goal in great games vs. then-No. 1 Redondo Union and longtime Orange County power Los Alamitos.

The first meeting between Oak Park and Oaks Christian girls lacrosse programs — the Lions are in only their third season playing girls lacrosse — was decided early and decisively by the host Eagles, and in the end the scoreboard read 16-3, Eagles.

The first few minutes, however, belonged to the Lions offense and the Eagles defense. Oaks Christian won the opening draw and had possession for the first three minutes, taking four shots, including a free position. The Eagles, though, turned them all away.

From that point on, it was all Eagles.

Over the next two minutes the Eagles scored six goals, all of them assisted. Senior captain Cam Bear got Oak Park rolling off a perfect pass from sophomore Kathy Kaschalk, and the track meet was under way. Senior captain Isabelle Campbell tallied the second goal, assisted by junior Yael Kaufman, then assisted on the Eagles’ next four goals, pushing the lead to 6-0. Campbell, who finished with 2 goals and 4 assists, assisted sophomore Livi Fagnani twice and sophomores Erin Dotson and Kaschalk once each.

The Eagles built their lead to 9-0 with 12 minutes to play in the half on goals from Kaufman, Dotson and Campbell and two more assists from Kashcalk. The Lions finally broke through on a goal by senior captain Brooke Bryne, who scored two goals on the night, to make it 9-1.

The half ended with the Eagles in command at 10-1, and as much as the offense was running and gunning, it was the defense that stole the show. Goalie Alexis Robinson made eight saves, and the defensive unit of junior Harper Wayne, sophomores Courtney Mueting and Maddie Suwara, with freshmen Riley deVarennes, Courtney Collins, Kathleen Dryden and Pifer Dryden played great team defense and shut down the Lions all game. In the first half alone Oak Park caused nine turnovers and scooped up 15 ground balls.

The second half was played at a slower pace, and the Eagles tacked on three more goals over the first 12 minutes. The Lions’ Bryne scored her second, making it 13-2.

Next up for the Eagles is an away game vs the Pioneers of Simi Valley April 5. Oaks Christian (2-6) plays at home against No. 17 Newbury Park on Friday.