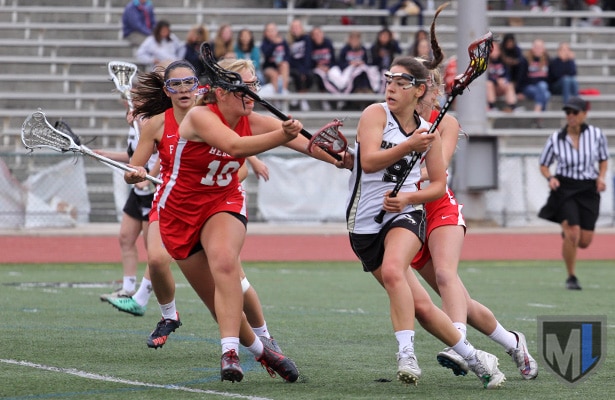 It took the Oak Park girls lacrosse team three tries, but the Eagles finally broke through, winning the US Lacrosse Los Angeles-area championship 13-8 over Redondo Union on Wednesday night at Mira Costa HS.

Morgan Shorts, one of 10 Oak Park seniors who played in all four championship games, scored all three of her goals in the second half as the Eagles maintained their lead, ran time off the clock, then slammed the door on the Sea Hawks and celebrated.

In the LA title game last year, Redondo scored two goals in the final two minutes for a 13-12 victory over the Eagles. The year before, Oak Park lost to neighborhood rival Agoura in overtime. In 2013, when these seniors were freshmen, Agoura beat them 13-7 for the LA title.

This time, the Eagles were determined to finish. Oak Park built a 7-4 lead by halftime behind two goals each from seniors Shayne Costello and Ania Brown and one each from Lauren Deurfeldt, Julia Gilliam and Ellie Strauch — all of whom were 0-for-3 in previous title games. The seniors wanted to leave no doubt.

But they still couldn’t put Redondo away early, thanks to three goals from Sea Hawks sophomore Alison Shafer.

Shorts did her best to put Oak Park in control as the second half opened, scoring two quick goals in the first minute, but Redondo still wouldn’t go away quietly. Sea Hawks senior Samantha Marcon matched Shorts’ goals with two of her own, and the margin was still only three at 9-6 with 20 minutes to play.

That’s when draw control and patience took over. The Eagles, who controlled 16 draws to Redondo’s six, ran three minutes of the clock before Gilliam scored to make it 10-6. After another goal from Shafer kept Redondo within three, Oak Park ran off another six minutes before Isabelle Campbell scored, extending the lead to 11-7 with 10:41 left.

Redondo scored again, on Shafer’s fifth goal, but not before Oak Park had burned another six minutes off the clock. It was 11-8, but only 3:19 remained, and that wasn’t nearly enough against the patient Eagles. Shorts and Gilliam tacked on goals in the final minute as the Oak Park sideline waited to erupt.