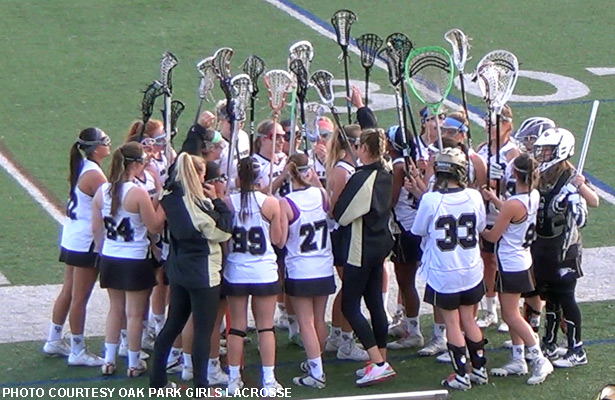 Monday afternoon, the Oak Park girls were unanimously voted No. 1 in the inaugural girls coaches poll. Monday night, they validated that ranking by rolling past visiting No. 7 Westlake, leading wire to wire in a 20-5 victory.

Eleven Eagles scored at least one point in the game, and the onslaught started in the game’s first 90 seconds on goals by Shayne Costello, assisted by Morgan Shorts, and Julia Gilliam, assisted by Ellie Strauch.
Westlake hung in there early, getting goals from Jordan Kuchta and Rachel Mason to pull within 3-2, but the Eagles ramped up the pressure at both ends sparked by 2 goals from Lauren Duerfeldt on assists from Cam Bear, to go on a 10-2 run, and close out the half leading 13-4.

Oak Park has been known for its high powered offense over the last few years — the Eagles averaged 15 goals per game last season and in 2014 — but this year they have that average up to 16. They also can score quickly.

With a minute to play in the first half, the Eagles led 10-4. Exactly 59 seconds later, they had poured in three more scores, the last one was a bomb from 25 yards out by Shorts, that caught the Warriors sleeping with one tick left in the half.

The second half began much like the first, with the Eagles scoring twice in the opening three minutes — both free-position goals by Gilliam — to make it 15-4. Ania Brown and Shorts then added a goal each to take it to 17-4 before Westlake scored its lone goal of the half, by Cayley Corridori, to make it 17-5 with 11 minutes to play. Costello’s fourth, followed by goals from freshmen Olivia Fagnani and Courtney Mueting, capped the scoring at 20.

The defense was as impressive as the offense for Oak Park, collecting 25 ground balls, causing 14 turnovers and allowing the Warriors only 10 shots in the game. The defense was anchored by goalies Meggie Sheehan and Alexis Robinson, with defenders Lauren Welin, Emma Barrow, Rachel Pham, Harper Wayne and Maddie Suwara shutting down the Warriors attack.

Oak Park improves to 7-0 and faces No. 2 Chaminade at home on Wednesday.