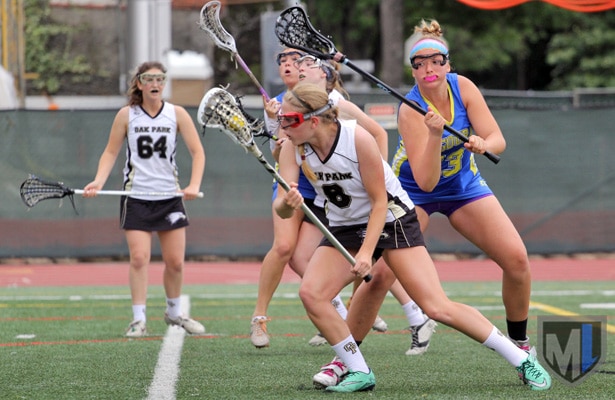 Top-seeded Oak Park reached the LA title game for the fourth consecutive year after surging past No. 4 Agoura 18-8 in the semifinals of the US Lacrosse LA Division playoffs Saturday at Glendale HS. The Eagles rode an 8-1 scoring burst to close out the first half with a 10-4 advantage.

Oak Park (15-3) advances to Wednesday’s title game at Mira Costa opposite Redondo Union, which beat Chaminade 9-7 on Saturday. It is the fourth consecutive appearance in the LA championship game for the Eagles, who lost 13-12 to Redondo in the title game last year, 20-19 in overtime to Agoura in 2014 and 1307 to Agoura in 2013.

Needless to say, the group of seniors that have powered his Oak Park team for the last four years would like nothing more than to close out their careers with a bit of redemption, beating Agoura and Redondo back-to-back to win their first LA championship.

In the early going Saturday, though, that prospect seemed a little shaky. The Chargers (14-5) took an early 2-1 lead and were up 3-2 without about 11 minutes left in the first half. But then the Eagles got hot. Julia Gilliam fed Lauren Duerfeldt for the tying goal, and the run was on. Two goals each from Gilliam, Duerfeldt and Morgan Shorts and one from Shayne Costello turned a tight game into a rout, putting Oak Park up 10-4 at halftime.

Four more unanswered goals to open the second half essentially put the game out of reach at 14-4. Agoura didn’t quit, though, eventually pulling within 15-8, but that was as close as the Chargers could get.

Of note for the Eagles is that senior Ania Brown, who has scored 40 goals this season, will miss the LA title game after receiving two yellow cards against Agoura on Saturday. Brown told the Ventura County Star (@vcspreps) that the first was for a foul and the second was for language used in discussion with her coach on the sideline.