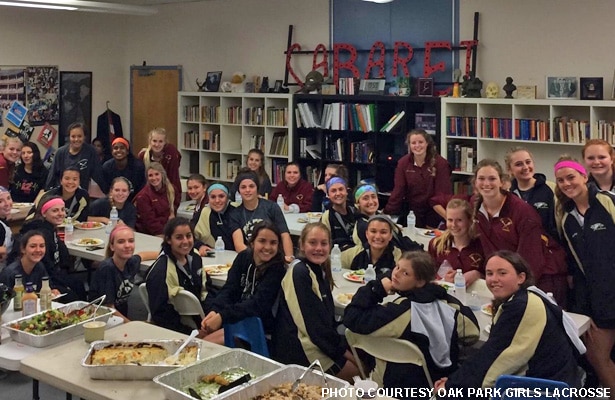 For the second consecutive year, the Oak Park Eagles played host to two NorCal teams over spring break. And in an example of SoCal hospitality, the Eagles and their families hosted dinners for both visiting teams. Pictured above are the Eagles and Menlo Atherton Bears.

As for the games, No. 1 Oak Park suffered its first loss of the season Wednesday night, 14-8 to Monte Vista of Danville, the No. 4-ranked team in the state. The Eagles then rebounded nicely with a convincing 19-11 win over Menlo-Atherton on Friday.

After Wednesday’s loss, the Eagles were back in form Friday, racing out to a 7-0 lead midway through the first half and never looking back. The half ended 13-4 in favor of the Eagles. Ania Brown had a career half, leading the Eagles with seven goals. The Bears never stopped pressing or working hard to get back into the game, but there was just too much for them to overcome. The scoreboard hit 0:00, and it was a final at 19-11 for the Eagles victory.

The defense was dominant, led by Rachel Pham, Meggie Sheehan, Emma Barrow, Lauren Welin and Harper Wayne, who held the Bears to only seven shots and four goals in the first half.

Up next for the Eagles is the Kanan Rivalry game vs. longtime foe the No. 4 Agoura Chargers (Monday, 6:30 p.m. at Agoura). Last year the Eagles finally snapped the Chargers’ eight-game winning streak against them, winning both meetings and outscoring the Chargers by a combined 43-10.